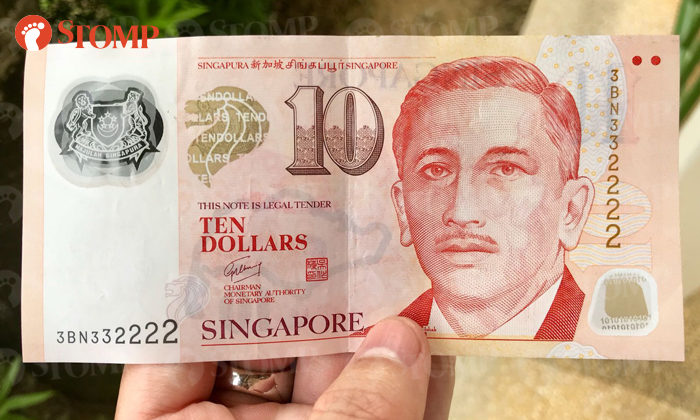 However, Stomper Lau Lup took a closer look at the note's serial numbers and discovered that they might be hinting at good news.

Lau Lup wrote: "I had a long and stressful work week. However, at end of the work week on Friday (Nov 3), I got this particular ten-dollar note from my work place's ATM.

"The serial numbers seemed to be congratulating me.

"3332222 sounds like '生生生呵呵呵呵!' in Mandarin. Which means 'alive alive alive, laughter x4' when translated to English.

"Alternatively, it seemed to congratulate me on my child's upcoming delivery and birth (生). His estimated delivery date is January 2018.

"Which means that I may be promoted either to be a father or/and promoted in my career!"

Related Stories
Do you notice the difference between these two $10 notes?
Guy spots 5 wasp nests on deity statue, then gets notes with serial numbers that match his birthdate
Lau Lup gets auspicious sign that he might prosper for nine generations
More About:
money