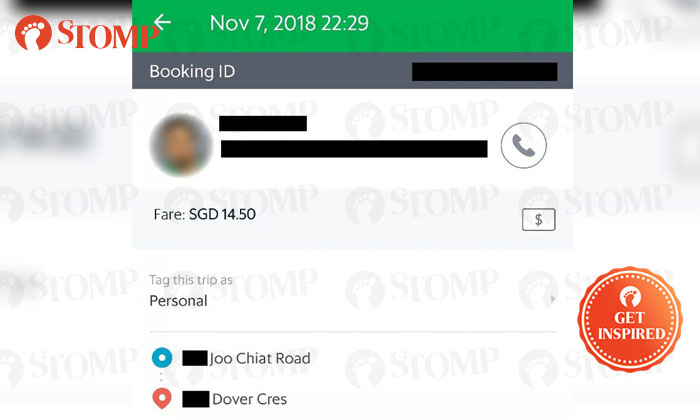 A Grab driver declined to accept a reward after rushing to return Stomper Munish his wallet which he left behind.

Munish was heading to Dover Crescent and had booked a GrabCar ride from Joo Chiat Road on Nov 7 at 10.29pm.

While he was in the Grab car, Munish said he took out his wallet and made the mistake of putting it on his bag instead of in his pocket.

When he got home at about 11.05pm, Munish looked for his wallet in his pockets and drawers, but it was nowhere to be found.

He immediately rushed downstairs to look for it, but it he still could not find it.

He realised that he must have left it in the Grab car.

He said: "I called the driver at about 11.11pm via the Grab application once, but was directed to the voicemail.

"Then I immediately called again a minute later at 11.12pm, and luckily the driver picked up!"

Munish said that the driver was near the National University of Singapore with a passenger in his car.

Munish told the driver that he left his wallet in the car.

At first, he suggested that the driver drop his passenger off first before returning him the wallet at his block.

However, according to Munish, after the driver had shared with the understanding passenger what had happened, she suggested he give Munish his wallet before heading to her destination.

The driver returned the wallet to Munish at about 11.20pm.

Munish said he offered the driver a reward, but he refused to accept it.

"I was relieved when I got my wallet back. I am very grateful to the Grab driver and the passenger for rushing to get it back to me."

Related Stories
Grab driver provides lollipops and water for passengers: "If I can give him more than 5 stars, I would!"
Commuter impressed by what driver did on Bus 972 that had no sign displaying the next stop
Kind Grab driver who gave free ride to blind student has given her "best birthday present", mum tells Stomp
More About:
grab
grab driver
kind
kind acts
kudos
inspiring