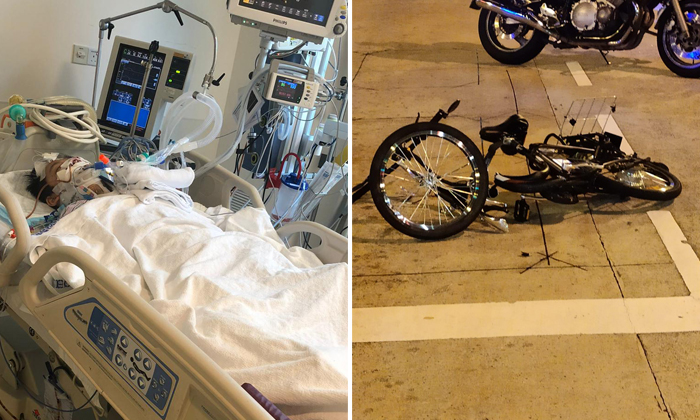 A GrabFood deliveryman was left with multiple injuries after a traffic accident on Tuesday night (Aug 4) and remains warded in the hospital's intensive care unit (ICU).

Stomp earlier reported that the accident involved a power-assisted bicycle and a car at the junction of Sengkang West Way and Jalan Kayu.

Police, who were alerted to the collision at 9.35pm, said the 29-year-old cyclist was unconscious when taken to Khoo Teck Puat Hospital.

A Stomper, who identified himself as a friend of the cyclist but did not want to be named, shared an update on the victim's condition.

The Stomper said: "My friend is currently in stable condition in the ICU.

"He has a burst spleen, two punctured lungs, a broken ribcage, a fractured shoulder, one broken leg and a blood clot in the brain.

"He will be undergoing another operation tonight (Aug 6) to check for further internal bleeding or injuries.

"His dad has dementia and his mum is already quite old.

"All his close friends and delivery riders from around Singapore are wishing him well and a speedy recovery."

According to Shin Min Daily News, the cyclist is believed to have been crushed in the accident.

Photos circulating online show the bicycle, debris and a GrabFood delivery bag lying on the road. Blood stains can also be seen at the scene.

Responding to queries, a spokesman for Grab said it is in touch with the victim's family and providing them with assistance.