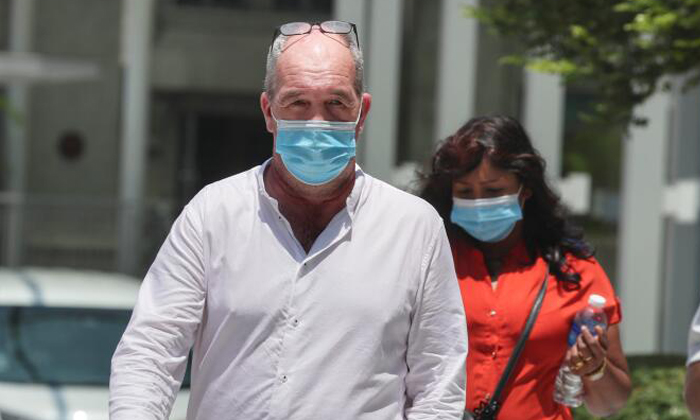 A Briton who breached his stay-home notice (SHN) and sneaked out of his room at the Ritz-Carlton Millenia Singapore to meet his then-fiancee was sentenced on Friday (Feb 26) to two weeks' jail and a fine of $1,000.

Nigel Skea, 52, had left his room on the 14th storey to meet Agatha Maghesh Eyamalai, who was staying in a room on the 27th storey of the same hotel.

She was not serving an SHN at the time.

The 39-year-old Singaporean woman was sentenced on Friday to one week's jail after pleading guilty to an offence under the Infectious Diseases Act. They were married here last November.

Skea had on Feb 15 admitted to an offence under the Covid-19 (Temporary Measures) Act and another under the Infectious Diseases Act.

He was issued with an SHN after arriving at Changi Airport on Sept 20 last year.

The Briton texted Agatha the details and she reserved a room at the hotel in Marina Bay.

After checking in the same day, she sent him a text.

Shortly before 1am on Sept 21, Skea left his room without wearing a mask.

He scouted the hotel premises for a viable route to her room.

"The accused walked to the emergency staircase on level 14 and realised that access to it... could only be opened from his side.

"The accused then walked back to his hotel room at... 12.56am before realising that he was locked out," Deputy Public Prosecutor Kenneth Kee had said during earlier proceedings.

Skea was forced to call the hotel's reception counter for help. A staff member then unlocked the door for him at 1.06am.

But he left his room again at 2.22am and walked to the emergency staircase.

This time, he used a piece of cardboard as a makeshift stopper so the door was left slightly ajar for him to re-enter his room.

Skea went up to Agatha's room and they spent the night together. He left at 11.13am but was unable to gain access to his floor.

He walked down to the fourth storey, where a security officer stopped him.

For committing the offence under the Act, an offender can be jailed for up to six months and fined up to $10,000.