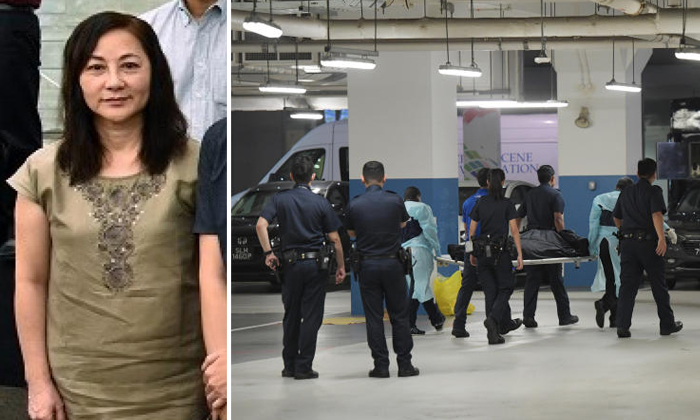 Years after his divorce, a retiree felt so resentful that he engraved on a knife the dates of his former wife’s alleged dalliances before ambushing her at a carpark at the Institute of Technical Education (ITE) College Central campus.

A struggle ensued and as she tried to get away from him, he stabbed her eight times. He then stabbed himself 13 times on his upper torso and collapsed on top of her.

A forensic pathologist said each of the three wounds to Ms Low’s left upper chest, left mid-back and left lower back was individually sufficient to cause death. Seet was convicted of a reduced murder charge on Tuesday (Sept 14).

The High Court heard that Seet stabbed himself repeatedly with the same knife after attacking Ms Low at the carpark of the Ang Mo Kio campus.

He was initially charged with murder under Section 300(a) of the Penal Code, which carries the mandatory death penalty.

Last month, the prosecution amended the charge to Section 300(c) for murder by intentionally causing fatal injuries to Ms Low. The charge carries the death penalty or life imprisonment.

On Tuesday, prosecutors told the court that it will not be objecting to a life sentence for Seet.

Seet did not contest the amended charge and calmly told the court: “I wish to plead guilty and don’t wish to give evidence.”

At the time of the murder, Seet was retired from his job at the ITE Headquarters and relied on monthly Central Provident Fund payouts. Ms Low was a divisional director of the examinations division at ITE College Central.

The court heard that Seet, who is twice divorced, blamed Ms Low’s alleged infidelity for ending their marriage and was unhappy with the division of matrimonial assets.

He believed he did not receive his fair share of the sales proceeds of a condominium unit in Corporation Road that the couple had bought in their joint names while married.

Some time before Chinese New Year in 2018, Seet left a letter on the windscreen of Ms Low’s car, demanding $500,000 and threatening to start legal proceedings.

On July 19, 2018, Seet collected a car he reserved through a car-sharing site, and drove to the ITE campus.

He took along a haversack that contained, among other things, three knives, a spanner and a note addressed to the police. The contents of the note were not revealed in court.

He arrived at the carpark at about 4.40pm and waited for Ms Low.

At about 7.30 pm, when he saw Ms Low approach her car, Seet got out of his car and walked quickly towards her.

As she got into her car, Seet entered through the front passenger side. Ms Low screamed loudly when she saw Seet, who then grabbed her arm to stop her from getting out of her car.

She managed to break free after a brief struggle but fell as she stepped out from the car. Seet then ran towards her and stabbed her multiple times.

A call was made to the police at about 7.45pm. Ms Low was pronounced dead by paramedics at the scene.

Seet was taken to hospital, where he underwent surgery for abdominal injuries and was placed in intensive care until July 25, 2018.

The day after the tragedy, Ms Low's friends and family turned up at the mortuary. Several members of the Grace Baptist Church, which she had been attending, were also there. Lead pastor Ian Buntain described Ms Low as a “lovely and joyful soul”.

The couple had met while working at ITE.

The court on Tuesday heard that a psychiatric report assessed that Seet was not suffering from any major mental disorder at the time of the stabbing.

Mr Wong, who is assigned to defend Seet together with Mr Loo Khee Sheng, said: “His paramount consideration to plead guilty is to shield his daughter and other loved ones from reliving the tragedy.”

The case was adjourned to Sept 22 for mitigation and sentencing.