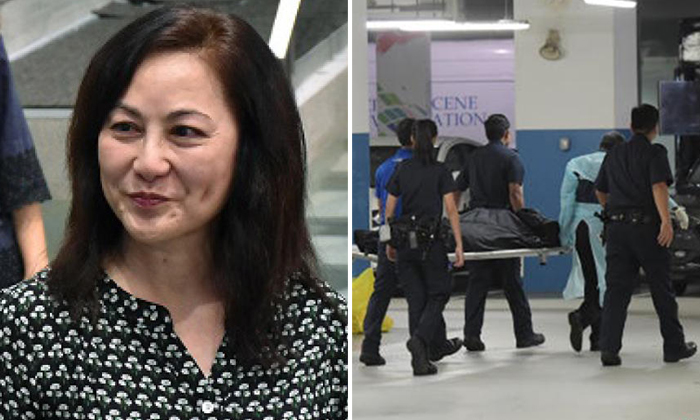 The suspect in the fatal stabbing of a woman at the Institute of Technical Education (ITE) College Central campus was charged with murder on July 21 while warded in hospital.

The deceased, who also went by her English name Michelle, was the director of ITE's examinations division and had been found dead in the campus carpark on July 19.

Seet is believed to have ambushed Ms Low at the carpark while she was getting to her Mercedes, reported Lianhe Wanbao.

Ms Low had been on the way home after work when Seet appeared with a knife and wordlessly started attacking her.

Caught off guard, the victim could not evade Seet's numerous blows despite efforts to get away. Two of the stab wounds were in Ms Low's left chest, where her heart was.

Bleeding profusely, Ms Low only managed a few steps before she fell face-down on the ground, in between two parked cars.

Following the "cold-blooded attack", Seet knifed himself multiple times, including twice in the abdomen. Drenched in blood, he collapsed less than two metres away from Ms Low.

He was subsequently taken to Tan Tock Seng Hospital with serious injuries and is no longer in critical condition.

According to Lianhe Wanbao, the attack is believed to have been sparked by money matters.

The two had met while doing industrial training at ITE, then got married after falling in love.

Seet left his job as a senior trainer at ITE College East around three to four years ago.

Friends who knew both the victim and the suspect said that Seet had a gambling habit and often asked Ms Low for money.

Shin Min Daily News reported that according to the Registry of Marriages, Seet was married twice. He wedded his first wife in 1981, and after a divorce, married Ms Low in April 1993.

Reporters visited Seet's first ex-wife at her home and noted that she became tight-lipped once Seet's name was mentioned.

However, when told that Seet was involved in a murder case, she expressed shock and said that she was completely unaware of the incident.

She also revealed that she had met the deceased once, but was unwilling to divulge further details about Seet and Ms Low.

The woman also said that her marriage with Seet was over a long time ago, and that they had ended all contact after their divorce, adding that she did not want anything to do with him.

During the interview that lasted close to 20 minutes, reporters observed her discomfort whenever Seet was mentioned.

Asked if her broken marriage with Seet was a painful memory for her, she was quoted as saying: "I don't want to mention this person (Seet) or anything related to the past anymore!"