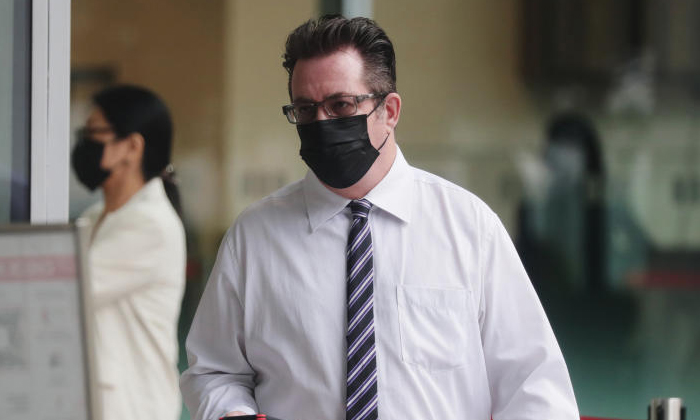 An international school teacher pushed a cabby four times and kicked him twice during a scuffle at the taxi stand of Thomson Plaza shopping mall.

On Thursday (Jan 20), District Judge Soh Tze Bian convicted Shane Matthew Ross, 51, of one count of causing hurt to Mr Gui Eng Chew during the incident on Feb 14, 2019, and sentenced him to six weeks' jail after a trial.

He also ordered the Canadian, who teaches at the Australian International School (AIS), to pay Mr Gui compensation of $441.

AIS told The Straits Times in a statement on Thursday that Ross has been on an extended leave of absence.

It added: "We have just been informed of the court's decision regarding one of our teachers and we respect the verdict... We will be communicating directly the impact this will have on his future employment with the school."

ST understands that under the school's policies, teachers who are convicted in court and sent to jail can lose their jobs.

In delivering his verdict, Judge Soh found that Mr Gui was a "truthful and credible witness", unlike Ross.

He added that as a "well-educated person" who teaches in a school, Ross ought to know the "seriousness of the acts of violence".

They added: "He does not dispute the accuracy of the CCTV recording, or the fact that he pushed and kicked (Mr Gui). It is also plain from his actions that he intended to cause hurt to the victim."

During the trial, Mr Gui testified that he picked up Ross and his son at the taxi stand of Thomson Plaza at around 5pm on Feb 14, 2019.

He drove off after Ross placed his belongings in the boot and got into the car. Ross then asked him to go to a particular condominium.

Mr Gui had earlier told Judge Soh that he did not know the way there as he could not "understand" the name of the property.

He added: "I asked for the postal code but could not find it on Google Maps."

When defence lawyer G. Dinagaran questioned him, Mr Gui denied that Ross had offered to direct him to the destination, and said: "He started to scold me."

Mr Gui also said that he felt frightened and drove back to the Thomson Plaza taxi stand in Upper Thomson Road.

The court heard that a dispute broke out between the two men soon after and Mr Gui stepped out of his taxi.

The prosecutors said in their submissions: "When the victim pointed his finger at the accused and asked the latter to alight from his taxi, the accused responded by pushing the victim's hand away before exiting the vehicle.

"The accused then pushed the victim two more times in the chest, causing the victim to take several steps back."

The DPPs also said that as Mr Gui walked to the boot of the taxi, Ross pushed him in the chest another time, causing the cabby to take a few steps back again.

The court heard that while Ross was reaching into the boot to remove his belongings, Mr Gui put his hand on the accused's upper arm.

According to the prosecutors, Ross tried to leave the scene by boarding another taxi with his son, but Mr Gui prevented it from leaving.

The Canadian and his son then left the premises on foot before the police arrived.

Ross had testified during an earlier court proceeding that he was "doing what was necessary to protect" his son, who has autism.

Ross also said that his son, who is not used to sudden changes, took three weeks to calm down after the incident.

The DPPs stated in their submissions: "Insofar as the defence asserts that the accused had acted in the exercise of his right to private defence, they bear the burden of proving this on a balance of probabilities. They have entirely failed to discharge this burden."

Related Stories
International school teacher allegedly pushed and kicked cabby for not understanding where he wanted to go
Teacher accused of assaulting cabby said he was trying to protect his son who has autism
More About:
assault
cabby
taxi driver
passenger
court