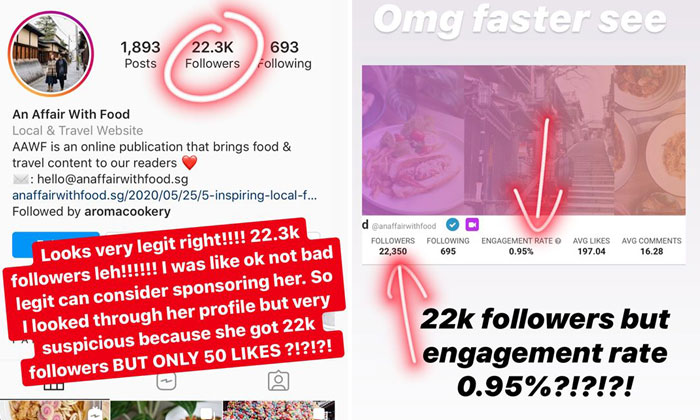 An influencer has responded to allegations by a small business owner who accused her of "reaping freebies with her fake likes/followers".

In her post, she said that Instagram influencer An Affair With Food (AAWF) had approached her for a collaboration.

At a glance, she deemed AAWF to be "legit" thanks to its 22.3k followers.

Venie agreed and said AAWF asked for three months and $300 worth of deliverables.

However, because AAWF declined to sign a contract, Venie sent over one month and $100 of products.

Venie then realised that something was "fishy" because of posts on AAWF that had only garnered around 50 likes. 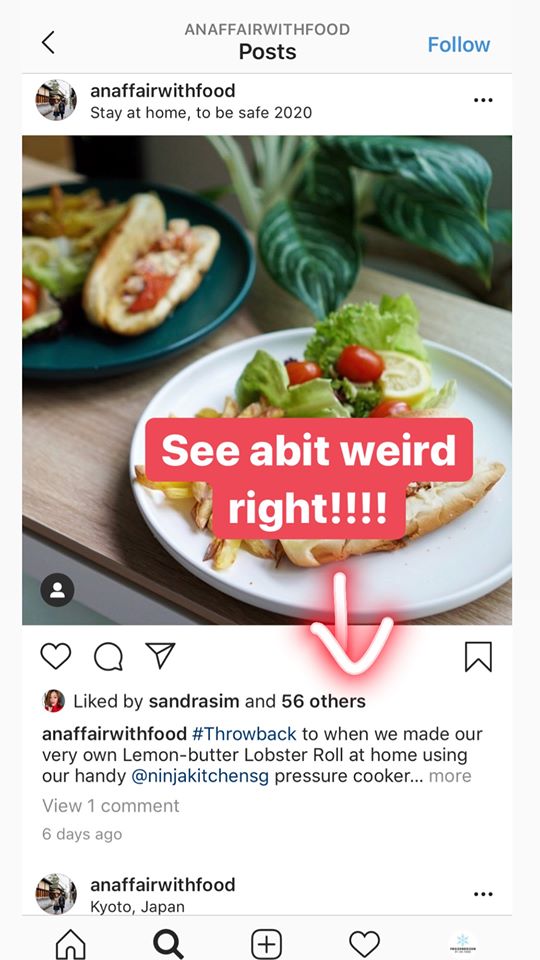 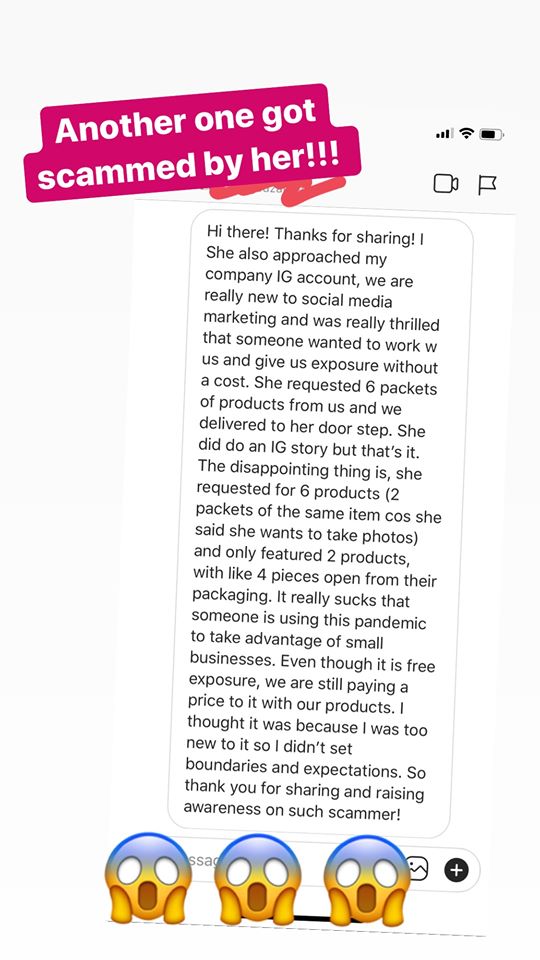 She noted that despite the large following, the account's engagement rate was a low 0.95 per cent.

She also noticed a recent spike in followers which she believed was bought with bots. 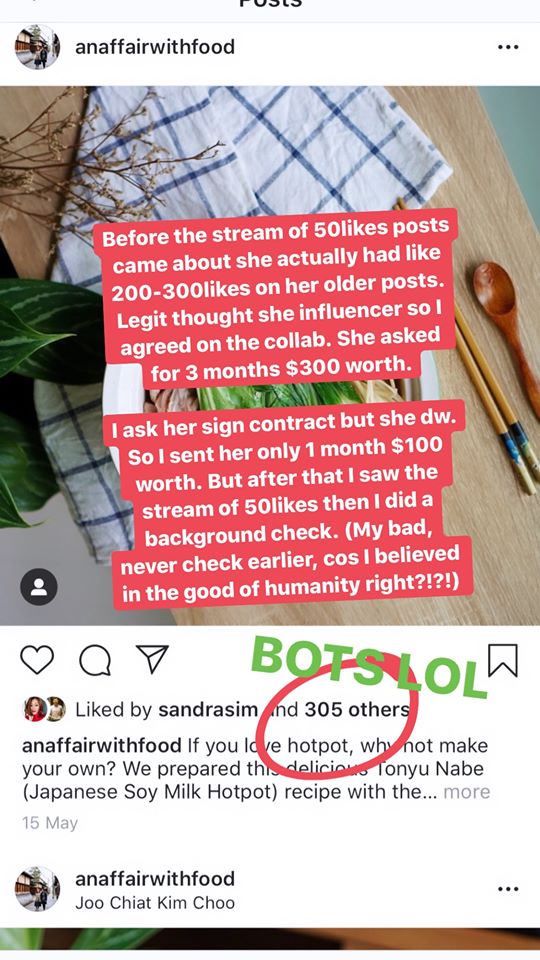 In screenshots of her correspondence with AAWF, Venie asked if the other party was willing to host a giveaway.

Initially, AAWF said it charged $300 for giveaways due to their 'high reach'.

Venie said that she had worked with another collaborator with 10k followers before without having to give any payout so to be fair to her other partners, she said she would prefer to work together without the giveaway.

AAWF then said they would do the giveaway free of charge.

Venie then sent AAWF an email requesting for a refund of $93.05 after deciding not to work with them anymore.

In her email, she mentioned it would have been considerate of AAWF to have put the frozen food wrongly sent to them back in the cooler bag.

She also pointed out that they initially collaborated despite her management not approving of the collaboration because AAWF would not sign an exclusive agreement with them.

She also shared her findings from Social Blade in the email.

She asked for a refund for and said she did not want to blow up the matter further.

However, she replied a response from AAWF that they wanted to take legal action against her and 'refused' to give the refund.

In her email, Xue Wei of AAWF said that it took Venie's statement of not wanting to blow up the matter and to implicate their collaborations with other companies to be of "threatening intent". 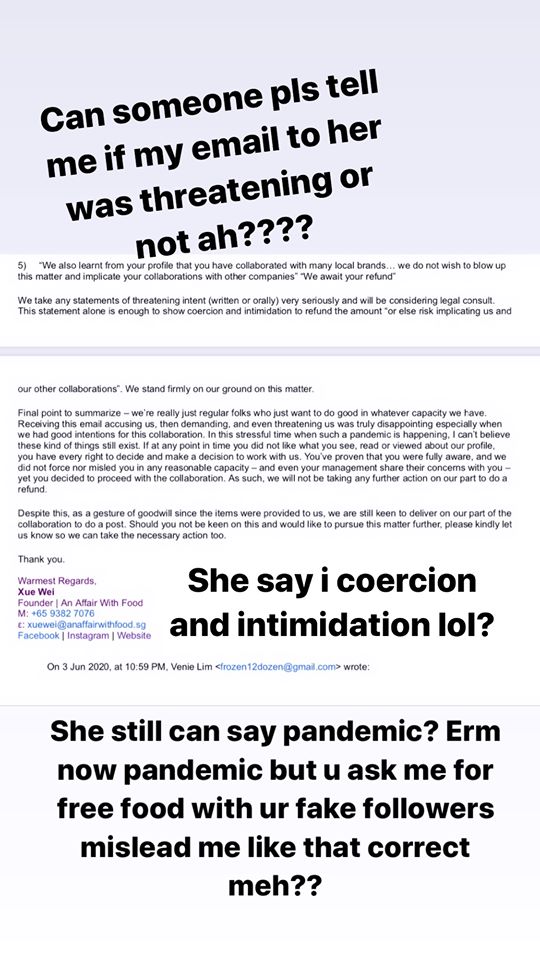 She also said the statement is enough to show "coercion and intimidation to refund the amount or else risk implicating us and our other collaborations".

Venie shared that after the email exchange, the likes on AAWF's posts were "pumped up". 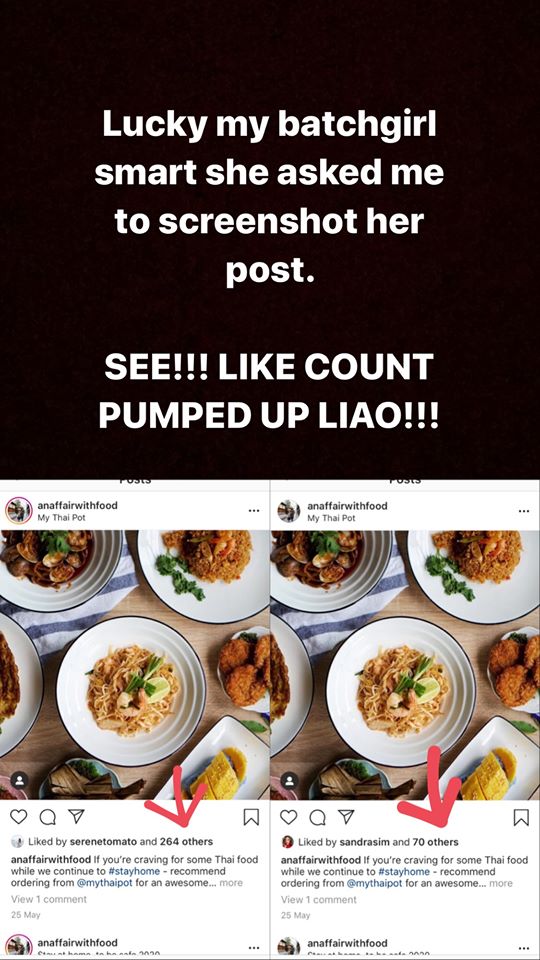 Venie wrote that considering her personal and professional workloads and the fact that a lawyer's letter would cost $150 and a writ of summons would cost $3,000, she has decided not to 'waste time' on the matter.

She also shared messages she received from other businesses that had unpleasant experiences with AAWF.

Venie wrote in her post: "This is a difficult time for everyone and all local businesses are working hard, especially the essential services company fighting on the front line to provide for the community.

"We do not appreciate a profile that uses the name of COVID-19 to mislead merchants for massive freebies."

AAWF addressed the accusations in a series of Instagram Stories saved on their page's highlights.

Xue Wei explained the reason she did not sign the three-month contract with Frozendozen was because they only sign off on paid engagements.

She said Venie agreed and they proceeded accordingly.

She said on June 3, they received an unexpected delivery from Frozendozen and had accidentally opened up the products to check.

Venie admitted it was a mistake on their part and requested for her to put the items back in the cooler bag for a driver to pick up.

She shared the same screenshot of the email Venie had posted with her own take that Venie was trying to "coerce" them into giving them a refund.

She also included her email reply where she explained she had opened the food products and why she had packed them the way she did.

She added that Frozendozen's deliveryman had taken their personal tote bag too.

She said that if Venie was concerned about the statistics like the engagement rate of AAWF, she should have brought it up to her management instead of proceeding with the collaboration.

She said that they have been "doing this for six years to grow our reach" and that any increase in growth and engagement can be attributed from "various sources" including articles on their website and hosting giveaways.

She added she is happy to share their statistics on their website with anyone who is keen to know.

At the end of the email exchange, she said that they would like to fulfil their part of an Instagram post to "do good on our word".

She also defended accusations from businesses who said they are "demanding" and "ask for many things".

She said: "We would like to make it a point that in all our collaborations, we have asked if they have any budget constraints -- if they do, we are happy to do it FOC or even throw [in] more posts for the good of it all."

View the full response in the gallery above.