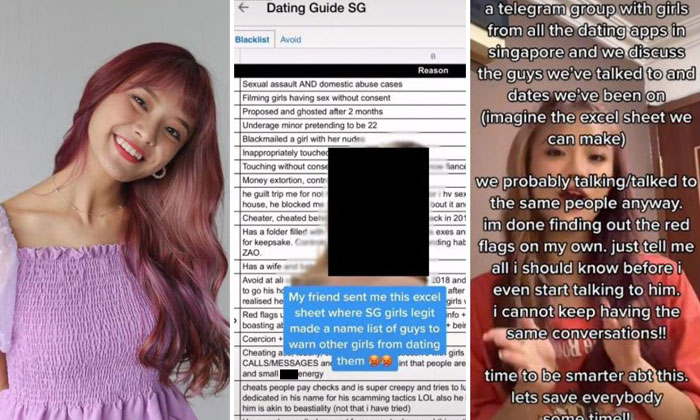 An influencer, accused by netizens of doxxing after she started a chat group for women to share details of Singaporean men not to date, said on Monday (Oct 18) that things had turned out “way worse” than she imagined.

Ms Koh Boon Ki, 22, who has more than 112,000 followers on TikTok, made a post on Sunday about creating a Telegram group for “girls from all the dating apps in Singapore” to “discuss the guys we’ve talked to and dates we’ve been on”.

The recent pharmacy graduate from the National University of Singapore said she was tired of having to look out for red flags when it came to dating.

“Just tell me all I should know before I even start talking to him,” she said.

She had also mentioned the idea of compiling the information into a document.

Shortly after, she created a Telegram group titled “sg dating adventures”, which grew as more users joined and contributed on Sunday.

Someone in the chat group then created a Google spreadsheet titled “Dating Guide SG” that was shared in the chat. The document was split into two tabs, labelled “Blacklist” and “Avoid”.

It purportedly compiled the details of dozens of men from anonymous users into an open document, with allegations ranging from cheating to sexual assault.

But the chat soon devolved to include discussions about the sexual prowess or lack thereof of certain men.

While many TikTok users lauded Ms Koh for her actions, others urged her to shut it down, saying it could be abused to frame innocent people.

Ms Koh was accused of doxxing and harassment by other TikTok users, as the document and chat shared personal details of the men such as their full names and contact details. 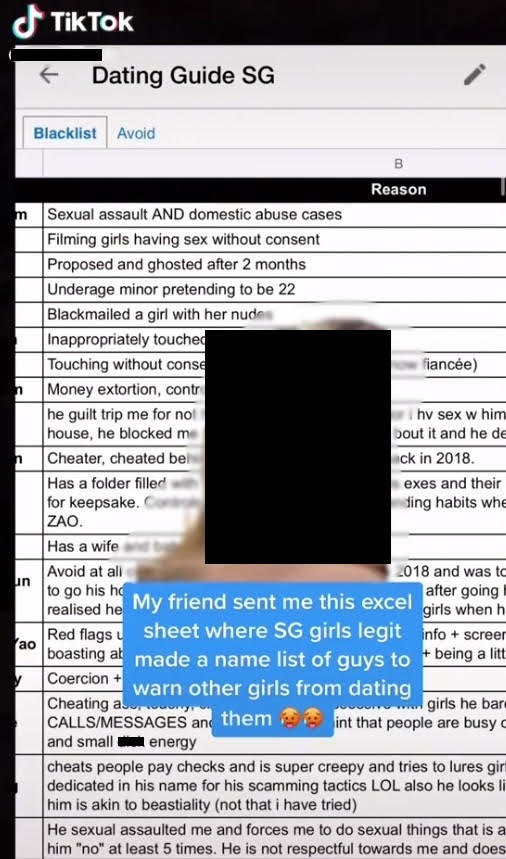 In an Instagram post in the early hours of Monday morning, Ms Koh claimed the group chat was closed.

That same day, she admitted in another TikTok post to creating the chat group, but said she was not responsible for the open document.

She said the intention of the group chat was for women here to share their dating experiences.

“I didn’t put enough consideration into setting boundaries and rules within the chat to moderate the discussion, and I did not realise that it was also slowly spiralling into a name-and-shame group,” she said.

“It did not turn out the way I imagined, and it turned out way worse.”

She claimed that she has learnt her lesson, but added that she still thinks having a “girl’s group chat” with proper rules is a fun idea.

The document has since been deleted, but it is not known if copies were made.

Criminal lawyer Joshua Tong of Kalco Law said Ms Koh may be liable to criminal prosecution under the Protection from Harassment Act (Poha).

He said that as a popular influencer, by creating the chat and posting about it on TikTok, she should know that it would be shared widely and would go viral.

"Given the wide reach and potential shame and embarrassment that it may cause the victims to an extremely wide audience, this may be seen as more aggravating and the court may deem that a strict deterrent sentence is required," said Mr Tong.

"The authorities usually go after the ones who are uploading or hosting."

But Mr Tong warned that those who contributed can also be prosecuted should the authorities deem it fit.

Ms Kelly Leow, communications manager of the Association of Women for Action and Research (Aware), warned that endeavours like that by Ms Koh are potentially problematic.

"There is always the chance of inaccurate or possibly malicious information being submitted through an open document," she said.

"The criminal justice system, while not flawless in its handling of sexual violence cases, does involve certain standards of investigation conducted by trained professionals, and is therefore more reliable than documents or accounts run by private individuals."

However, Ms Leow said that it is important to also think about why such documents are made.

"Before we write them off as crude or irresponsible, we have to ask ourselves why sexual violence survivors are turning to such methods to share experiences of sexual assault in the first place," she said.

"Without improving our institutional processes to deal with sexual violence, we will continue to see that hurt and rage channelled in ways that some may deem inappropriate."

Ms Leow noted that some of these cases had an element of blackmail, involving the exchange of messages or photos containing sexual content.

She said the best way to tackle the issue is through comprehensive sexuality education, which should cover emotional well-being, empathy, respect for others, healthy relationships and consent.

"If these principles are properly disseminated to the general public, we should see fewer cases of sexual violence, and when cases do occur, a more supportive and understanding environment for survivors."

Under Poha, those who publish the personal information of another to cause harassment, alarm or distress, may be jailed for up to six months and fined up to $5,000.

Those convicted of defamation under the Penal Code may be jailed for up to two years and fined.