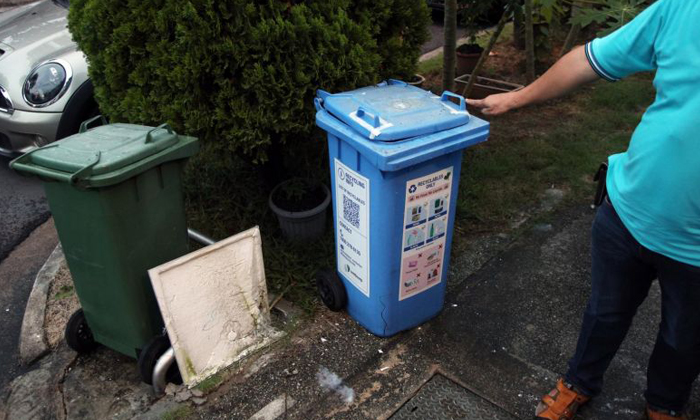 An Indonesian woman has been sentenced to five months’ jail after admitting in a district court on Thursday (Nov 5) that she had abandoned her newborn baby boy in a private estate near Upper Paya Lebar Road on July 27.

The infant was discovered in a recycling bin in Tai Keng Gardens.

He was taken to KK Women's and Children's Hospital, where he was found to be in a stable condition with no visible injuries.

At the time of the offence, the 29-year-old offender was hired as a maid. The court heard that she had developed a relationship with a Bangladeshi man in 2018 and earlier this year, discovered she was pregnant.

She wanted to terminate the pregnancy and took pills to end it but it did not work.

On July 27, the woman, who cannot be named due to a gag order, felt contractions and gave birth in a bathroom in her employer’s home at around 1pm. The address was not disclosed.

After cutting the umbilical cord with a pair of scissors, she wrapped the infant in a towel and put him in a paper bag.

She then placed the newborn inside a recycling bin and propped up the lid so air would enter the bin.

Sometime later a resident of the estate heard the baby crying. The Straits Times in July spoke to a man whose family found the baby.

Mr Lew, who declined to give his full name, said that his son-in-law heard the infant crying shortly after a family dinner.

Mr Lew said: "He heard a strange noise coming from (the bin), and asked some of us for help to check it out.

"No one dared to open the bin because they thought it might be a cat or a dog, so they called me for help."

After lifting the lid, he spotted the infant, who was wrapped in a towel and placed inside paper bags. The police were also alerted.

His family took the baby out of the bin and an ambulance arrived soon after.

In an earlier statement, police said that they had identified the woman through extensive ground investigations and with the aid of images from closed-circuit television (CCTV) footage provided by residents.

For abandoning a child, the woman could have been jailed up to seven years and fined.