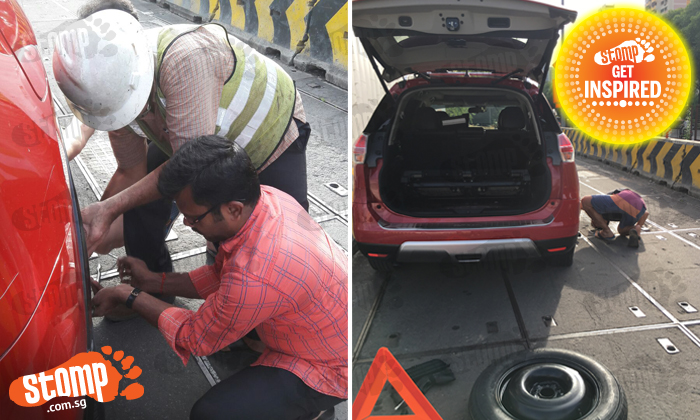 One of the two men who helped Stomper Chris replace his punctured tyre on the Central Expressway (CTE) on Jan 4 has been identified.

He is Mr Gopal Venkateswaran, a 37-year-old Indian national and an experienced lorry driver who has been working for construction company SK E&C for seven years.

In an earlier Stomp report, Chris said he was travelling along the CTE at around 5.10pm when his rear right tyre was punctured.

The 49-year-old, who is a senior consultant at a human resources company, then slowly drove to a construction site where cable tunnels are being built, next to Hong Wen School near the Balestier Road exit.

Mr Venkateswaran and another man, believed to be Singaporean and also a lorry driver, went up to help the Stomper. The tyre was replaced in less than 15 minutes.

Mr Venkateswaran told The Straits Times, "I saw that (Mr Goh) and his wife were struggling to replace the tyre so I just went to help. I know they took photos but I am surprised that they posted these online."

Singapore Kindness Movement general secretary William Wan said: "There is kindness in all of us, regardless of our race or nationality. I am inspired by both the workers who helped and the driver who made it a point to express his appreciation by telling the story of the workers' kindness."

Colleagues of Mr Venkateswaran have also been circulating an email about the original Stomp post.

"It is a proud moment for us," said safety manager Vijay Anand.