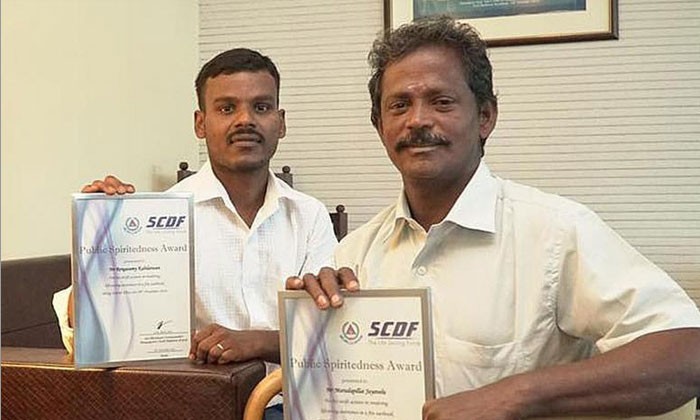 Retiree Connie Tan was reading at her home in Sunset Place, Clementi, when she saw lightning strike outside her window.

When she checked a while later, she realised that a room on the third storey of her house was on fire.

She told The New Paper: "I immediately called 999. Then I tried to use a hose to douse the fire. It was spreading very fast."

While trying to fight the fire, she heard two foreign workers shout: "Madam, come out."

Mr Marudapillai Jayavelu, 46, and Mr Rengasamy Kabilarasan, 26, who were working on the roof of a house on the opposite side of the road, had climbed over the gate to check if there were people stuck inside the burning house.

They entered the house and evacuated the occupants. None of them was injured in the Nov 10 incident.

When TNP informed Mrs Tan about the award, she said: "I'm grateful to them even though I cannot recognise them because everything happened so fast. I wanted to thank them and give them hongbao that day."

The award was presented by Madam Michelle Liem, chairman of the Bukit Timah Citizens' Consultative Committee at a ceremony held at First SCDF Division Headquarters.

Mr Jayavelu said: "I feel very happy to be able to receive this award because it is not something that everyone gets."

Mr Vince Selvam, 22, director of Starlight Building Maintenance Services, the workers' employer, said: "We feel very proud of them and we will be taking the two of them out for a nice dinner."

Colonel Alan Chow, commander of First SCDF Division, said: "This is a commendable act. In times of emergency, we need people like that to come forward and render assistance to others."

Mr Jayavelu said: "We were not scared of the fire. SCDF had already been alerted then, so we just wanted to check if anyone was hurt."