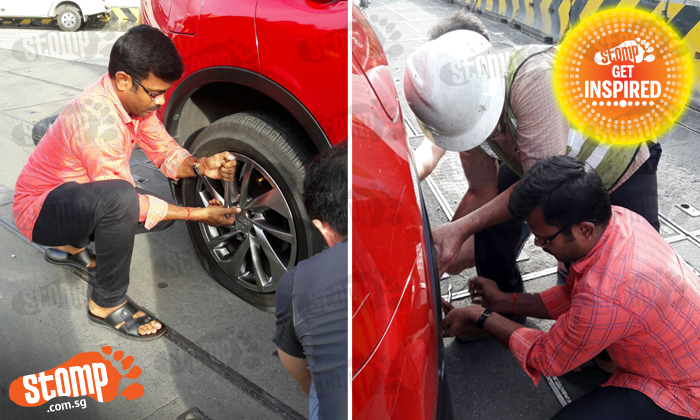 Stomper Chris was driving along the Central Expressway (CTE) yesterday (Jan 4) when his car suffered a tyre puncture -- but what happened next left him speechless.

Two foreign workers stepped up and helped him to replace the tyre, which Chris feels is worthy of a salute.

The Stomper, who hopes to thank the two kind souls by sharing his story, said:

"Yesterday at about 5.10pm, I punctured my rear right tyre while driving along the CTE towards the city.

"I crawled my car next to a construction site to replace the tyre.

"While struggling with my spare tyre, a foreign worker approached my car and started to unscrew the bolts on the rim. He then went on to jack up the vehicle and remove the wheel.

"Meanwhile, another worker came to help.

"I was speechless. While replacing the tyre, my wife took some photos.

"These foreign workers not only contribute significantly to Singapore's economy, they also readily assist anyone who is in need of help. Thank you!"