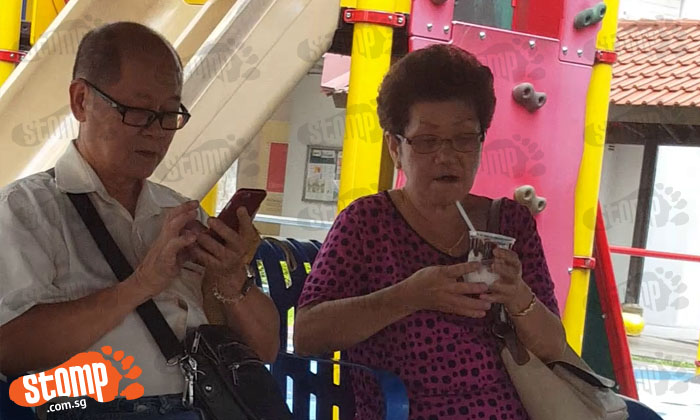 Stomper Ah Boy saw the heartwarming sight of an elderly couple sitting on a bench at a Yishun block and playing Pokemon Go yesterday (Sep 23).

According to him, the couple was playing the game at around 3pm.

"Wahahahahahhahhaaaa..  least they enjoy their retired days... rather than many folk out there.. they are in folks home... maybe don't even have chance to catch pokèmon like this sweet couple.

"Or they might not know the existence of such games. Hope their grandchildren did visit them regularly to show them the latest Snorlax they caught.

"It's really a good thing that elderly follow trend. At least hor, got conversation topic with their grandchildren."

The Stomper also posted the video on Pokemon Go Singapore Facebook group, and garnered a lot of reactions from fellow Pokemon players, who all thought it was cute that aunties and uncles played the game.

One commenter wrote, "You all never hear the one at NEX... Aunty A to Aunty B: 'Kah khin! Kah khin! Liak hee jiak jiao!!!' I was stunned like a vegetable."

Others commented that they looked like a sweet and loving couple, and some added that they have also seen 80-year-old 'ah gongs' playing Pokemon Go and felt that it was good exercise for them.