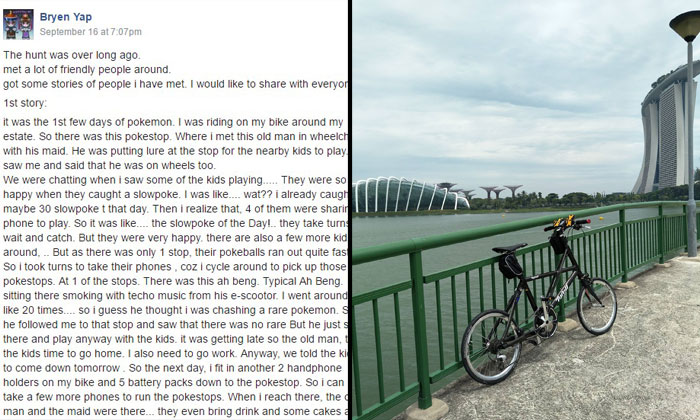 The Pokemon Go craze in Singapore has brought attention to massive crowds chasing rare pokemons but a player has shared stories that go beyond the game.

In his first story, he recounted coming across an old man in a wheelchair at a pokestop who had bought lures for children playing there.

Seeing how the four children were sharing just one phone to play the game, he helped them enjoy the game better by visiting other nearby pokestops on his bike with their phone to collect items like pokeballs.

His last story recounted how he met a pair of brothers playing Pokemon Go at MBS as well.

The younger brother was playing and had his screen mirrored onto the tablet his older brother, who was wheelchair-bound, was using to make it feel like he was the one catching the Pokemon himself.

When a nearby crowd made a commotion about Pikachu, Bryen took it upon himself to take the younger brother's phone to quickly catch the popular pokemon for the brothers.

Bryen's stories touched the hearts of several citizens who praised him for bringing joy into these kids' lives.