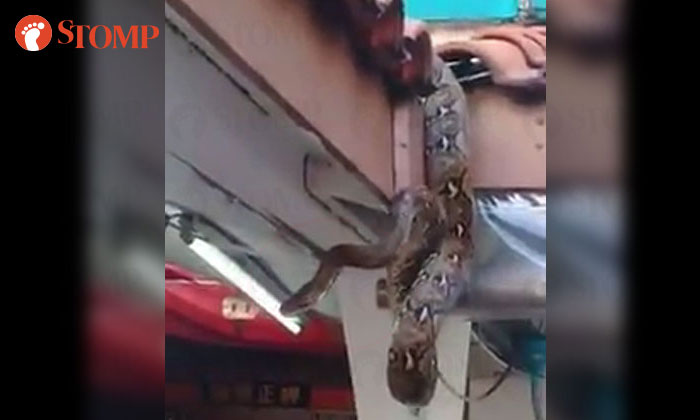 A python coiled in the eaves of a roof at a wet market in Bukit Batok caused a stir in the neighbourhood on Saturday morning (April 28).

Stomper Roni shared his own video of the snake with Stomp and said it was near Block 273 Bukit Batok East Avenue 4.

In the video, you can hear a crowd buzzing as the the python makes small movements.

A dead rat can be seen on the ground just below the reptile.

Roni told Stomp that someone called the Animal Concerns Research and Education Society (Acres) but the snake was gone by the time the wildlife rescue group reached the scene.

Mr Kalai Vanan, deputy chief executive officer of Acres told The Straits Times that the group received a call about the python on Saturday morning.

"It is our native reticulated python which was sighted at a wet market," he said. "We believe the python was eating a rat when it was first sighted. The snake had gone back into some roof gap and could not be located."

He added that "there is nothing to be worried about".

"Rats and small birds do tend to use roofing areas as homes and the snake probably decided to stay there to find food," he said. "Areas like wet markets do tend to attract rats and this in turn will attract pythons which are great at controlling rat populations."

Acres urged the public not to be alarmed, and advised them against provoking or handling the snake.

Related Stories
Man removes python from underneath car with his bare hands
Acres says python was not removed correctly from lamp post in Bukit Batok
Python with huge belly pulled out from bushes along Normanton Park
More About:
snakes
python