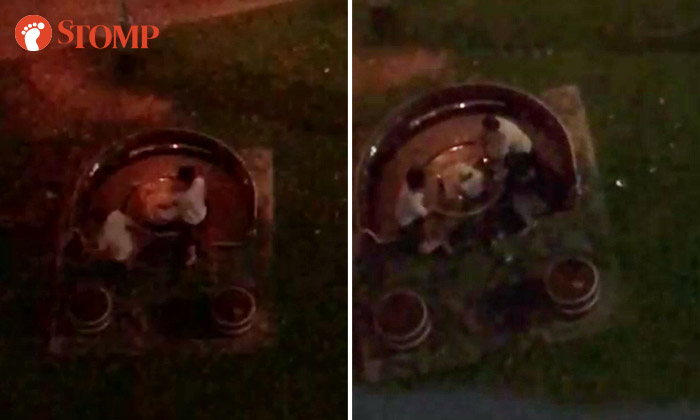 An Hougang resident's sleep was disturbed when she heard a group of men singing loudly at the foot of her block at about 12.30am on Monday (Dec 23).

Stomper A said: "This happened at Block 311 Hougang Avenue 5. I woke up as I suddenly heard loud noises coming from downstairs.

"I decided to take a look at the window and saw a few men drinking. They were also talking and singing loudly.

"I feel that this isn't the right thing to do since it's already past 12 midnight.

"Other people are trying to sleep and these men shouldn't be singing and/or talking so loudly.

"I live on the ninth floor mind you and I can hear it so loudly and clearly."

The Stomper contributed videos of the incident.

She added: "I've been a resident here for about 16 years already.

"I don't really remember when I first noticed them but this happens quite often.

"I didn't make any report to the police or other authorities.

"There were three men there. I haven't taken note of how many times they're there each week because I usually just ignore them.

"I feel they should be more considerate of others as it's midnight already and other people are trying to sleep."

Related Stories
Teens keep residents up by playing basketball till late at Yishun
How to sleep with this racket? Youths play ping-pong at Woodlands void deck till as late as 4am
LTA apologises for overnight construction works that kept Ang Mo Kio residents awake
More About:
noisy
Hougang
nuisance