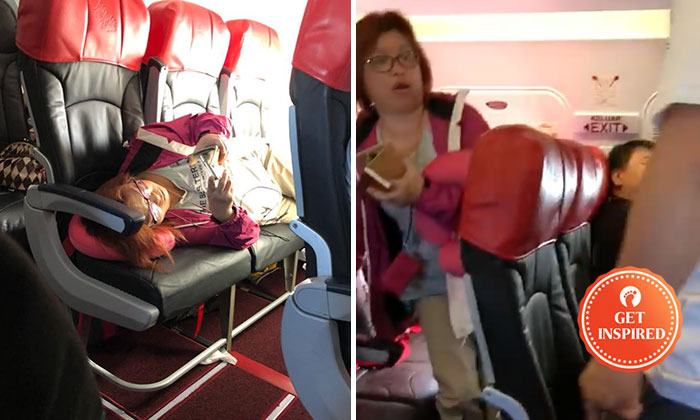 A Facebook user recently posted about an encounter with an unreasonable woman onboard an AirAsia flight from Kuala Lumpur to Hong Kong.

In his post, Bruce Lam said that a friend had gotten him and his two companions AirAsia X Premium Class seats.

Just as the plane was about to take off, a middle-aged woman left her economy class seat and lay down on the unoccupied premium class seats behind Bruce.

According to Bruce, an air steward promptly advised the woman to go back to her own seat.

The woman questioned him:

The air steward explained that the passengers on the premium class seats had forked out extra money for them, and she could book the seats for her next flight if she wanted to.

After a verbal tussle that lasted for four to five minutes, the woman finally returned to her own seat.

Soon after the plane took off, the woman occupied the seats behind Bruce again, prompting the air steward to ask her once again to return to her seat.

Again, the woman insisted on staying and the air steward was forced to explain why she could not take the seats again.

The exchange lasted another four to five minutes before the woman finally agreed to move back to her allocated seat.

“A few minutes later, the woman returned to the seats behind me again for the third time. She lay down and started playing with her phone.

“This time, an air stewardess came to her and requested that she return to her seat.

“The stewardess told her that it wouldn’t be fair to other passengers if she could ‘upgrade’ her seat by herself, while others could not.”

However, the woman started yelling and making a scene, refusing to leave.

“I’m not sure if it was the stewardess being so polite and nice, but the auntie’s attitude became worse.”

Deciding that he could not tolerate the woman’s incessant rants and boorish behaviour, Bruce finally stood up and shouted at her in Cantonese:

“Just return to your seat. Once, twice, thrice, they asked you. Do you know shame at all?”

“That's none of your business.”

Another verbal spat ensued, and the woman finally relinquished the seats.

“After about 10 minutes, the air steward and stewardess came to me to thank me.”

The stewardess told Bruce for standing up for her and left a cup of mineral water in gratitude.

Noticing that both of Bruce companions looking at the cup, she returned later with two more cups for them.

“Some people will only take advantage of you if you try to be nice to them, you have to be prepared to use harsher language.”

Bruce also noted that a friend that told him that the same auntie had attempted to cut the boarding queue and sneezed without covering her mouth, spraying snot over other passengers.

The date and time of the flight cannot be ascertained.

Stomp has contacted AirAsia with regard to the incident, but they have declined to comment.