Half-naked man steps in front of Bentley driver, flashes middle finger and tells him to "donate" 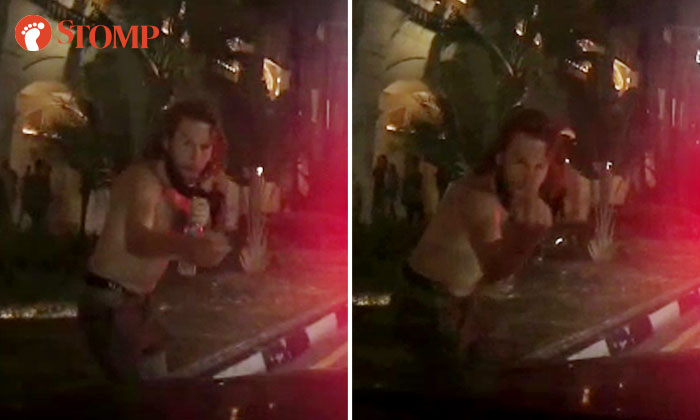 Stomper Anonymous was driving along North Bridge Road on Sep 22 at about 12.16am when a half-naked man suddenly stepped in front of his car and flashed the middle finger at him.

The Stomper shared with Stomp a video of the incident that was captured on his in-car camera.

"I was driving out from Purvis Street to avoid the traffic jam as roads were closed due to the F1 weekend," said Anonymous who drives a Bentley car.

"As I was driving North Bridge Road after the Raffles Hotel drop-off point, a man suddenly dashed out in front of my car and pointed a middle finger at me.

"I was blur and winded down my windows to ask him what his problem was."

In the video, the man is heard telling Anonymous to "donate money".

When the driver asks him "for what", he replies: "For anything."

"He kept pointing his middle finger at me so I came out from my car to confront him," said the Stomper.

"At this time, I was very upset after he pointed his middle finger at me repeatedly.

"He said: 'You drive a big car, why don't you make some donations'.

"I don't understand why he was saying all this without knowing anything, I don't even know him at all nor did I disturb him.

"After my wife called the police, auxiliary officers arrived at the scene.

"The man walked away and I drove off as I did not want to obstruct traffic."