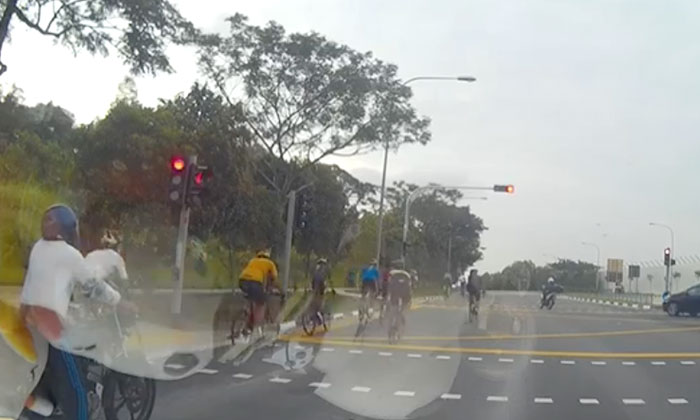 A group of cyclists was caught on video beating the red light at a traffic junction.

In a video posted by Andy Goh on SG Road Vigilante's Facebook page, a group of cyclists is seen riding in the leftmost lane of a three-lane road.

A sign by the road points to Yishun Avenue 6, while the time stamp shown on the video indicates that the incident happened on Sunday (April 8) at around 9.02am.

The footage then shows Andy stopping his vehicle at a traffic junction when the light turns red.

However, the cyclists continue to ride on despite the red lights, giving no regards to traffic rules.

“I have nothing against cyclists on the road.

“But if you want to have a right to be on the road then it is only right you comply with road traffic rules.”

Many netizens have commented on Andy’s post, slamming the cyclists for their reckless behaviour.

“They should have stopped.”

Whatever the case, one can agree that this example certainly does no favour for the reputation of cyclists on the roads.