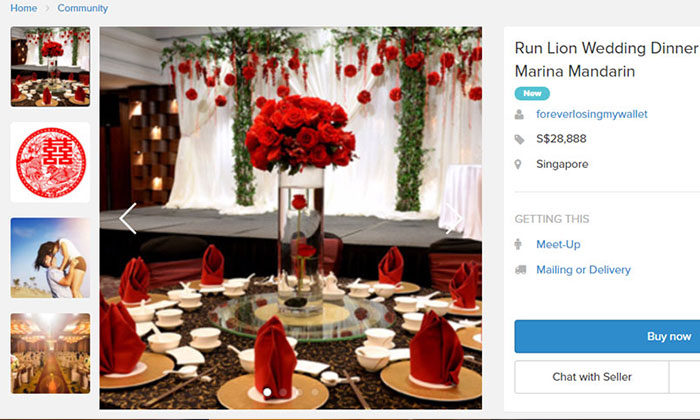 A heartbroken groom-to-be placed his wedding package up for sale on an online marketplace, Carousell, after his girlfriend of four years eloped.

Priced at $28,888, the package includes 30 tables at Marina Mandarin on Oct 13, a wedding car with a chauffeur included, wedding suits and gowns for the couple, as well as their parents.

Also included are dresses and suits for the groomsmen and bridesmaids, a photographer and a videographer for the wedding dinner, and the gatecrash games.

Overall, the package can be considered quite a steal.

According to the groom-to-be’s listing description, he had ‘paid the ultimate price’, attempting to marry young and have more children to contribute to the fight against the ageing population.

The heartbroken man, who described himself as ‘not ugly, not skinny, smoker, social drinker, Godzilla slayer, most importantly, a filial son', said:

“I what also don’t have, money I a lot, not super super super rich, but rich enough to buy her Hermes bao bao just to see her smile… But now… it’s ok.

He also told Shin Min Daily News that couples who purchase the package could save up to $3000 to $4000.

So, if you’re hoping to get hitched, this could just be your chance to land yourself a good deal.

Alternatively, you can introduce a girl to this poor man, and hopefully, they’ll fall in love and get married on the wedding date itself.