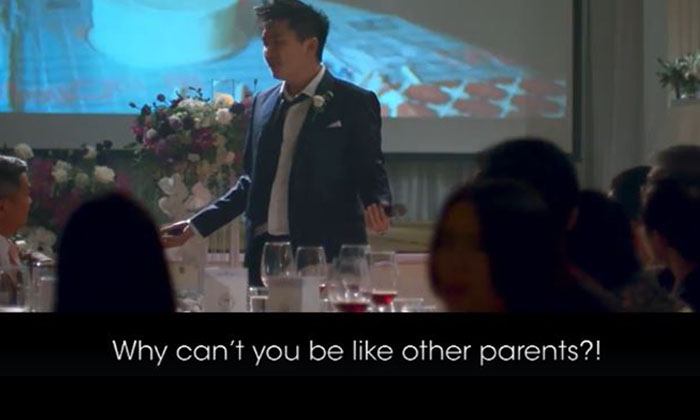 Imagine yourself at your son's wedding, and your son tells you that you are the worst parent in the world during his wedding speech.

This was exactly what one man said when he gave his wedding speech which was caught in video.

Much to the shock of the guests who attended the wedding, the groom opened his speech by sarcastically thanking his parents.

He started off by explaining how he was never given much things as a child growing up, as compared to his peers.

"I've always questioned, why I was never sent to piano lessons as compared to all my other friends," the man said.

"Most of my friends went to esteemed tuition centres.

"My tuition was our neighbour, Miss Tan."

He also recalled how his family trips were only to nearby destinations like Bangkok, while his friends enjoyed trips to theme parks in Florida.

"No fancy birthdays at clubhouses, no magic shows, just Ma and Pa doing a few tricks," he continued.

He then pointed out to an image of him as a child sitting miserably at one of his birthday parties and exclaimed, "Look how happy I was!"

"Why can't you be like other parents?!" he cried out.

At this point, his father, who had appeared visibly embarrassed and angry throughout the entire speech, stood up to face him.

In a surprising turn of events, his father suddenly embraced him and gave him a playful rub on his head, much to the amusement of his son.

"See, that's Pa for you," the man said with a beaming smile.

The slideshow behind them then flashed images of him and his parents in various moments of his life, including his graduation.

"I had an amazing childhood," he said.

"So what if I wasn't sent to piano lessons?

"Being tutored by Miss Tan, made me want to go to the same university as her, which I did.

"Ma and Pa, even though we never really celebrated your birthdays, you gave me the best birthdays a child could ever ask for.

"Had you given me everything I wanted back then, I wouldn't have everything that I can have now.

"You juggled between spending on me, and saving up for your retirement.

"But you didn't do it for yourself, you did it for me.

The man then brought his speech to a close, much to the applause of the other wedding guests, who look to be emotionally moved and on the brink of tears from his touching speech.

The video, uploaded on the NTUC Income's Facebook page last Thursday (Aug 30) entitled The Best Gift For Your Child, was set in a wedding banquet and featured a groom giving a speech to his parents.

Many netizens were emotionally moved by the video and were left in tears.

Other netizens were also moved by the song chosen for the video.

According to The Straits Times, the video, which was directed by Mr Roslee Yusof of Freeflow Productions and shot over the course of three days, was a commercial encouraging retirement planning.

Prior to the production of the video, NTUC Income commissioned a research study with data and measurement company Nielsen which covered more than 400 parents aged between 30 and 55, and 200 people aged between 19 and 25.

"The study confirmed our hunch that parents were motivated to prioritise their children's future over theirs and would continue to do so," said Mr Marcus Chew, chief marketing officer at NTUC Income.

"Children also foresaw downgrading their lifestyles, making career-related sacrifices and even delaying their marriage to help financially support their retired parents, as many expressed low confidence that their parents were retirement ready."

Mr Chew mentioned that this tension between both sets of desires was the main inspiration behind the creative direction of the video.

According to him, the video was meant to challenge the notion of "best", and to think about whether saving for one's retirement could be the "best gift" a parent could give to their children.

"We intend to engage our target audience and spark off conversations and encourage Singaporeans to think more deeply about their retirement plans."