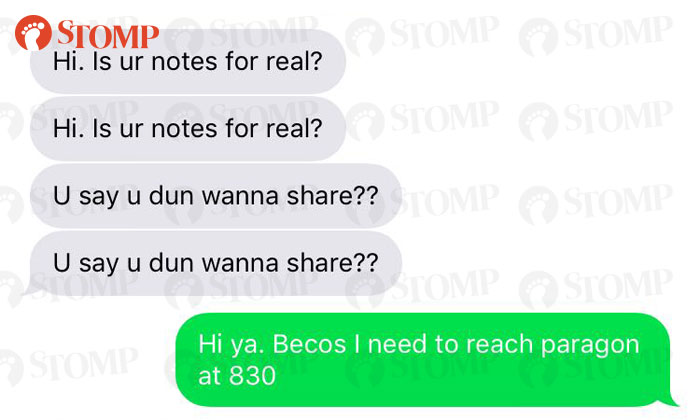 Stomper James' girlfriend was frustrated when a GrabHitch driver launched a tirade at her via text over preferring not to share a ride from Woodlands to The Paragon this morning (Sep 13).

The GrabHitch driver accepted her trip and proceeded to text her to ask if her note was "for real".

She replied that she meant what she wrote because she needed to reach The Paragon at 8.30am.

The driver then proceeded to ridicule her for expecting to get from Woodlands to The Paragon for only $13 (before a $4 promo was applied) and not wanting to share with another rider.

He then told her to take a GrabCar instead.

He added: "I accepted [because] I thought it was a joke. I never expect[ed] you [to be] for real.

"Everybody on Hitch know[s] [it's] possible to share that['s] why [it's] cheap. You want cheap but don't want to share. For real?

"All you have to do is wake up 15 minutes earlier. I can't believe you were for real.

"Your expectation for $13 is very high and you don't know what GrabHitch [is] at all."

James' girlfriend was offended by the driver's texts and said that he could have chosen to cancel the ride.

"If the expectation is not matched, the driver can choose not to pick up the ride or the passenger can choose to cancel the ride, but this driver has been very offensive with his words.

"This is a world of freedom of choice. It's rather unfair if the driver chose to pick up but is aggressive to the passenger."

The Stomper added that GrabHitch drivers have a list of rider requests to choose from and it seemed to him that the driver purposely chose his request just so that he could "scold" him.

Stomp spoke to a Grab spokesman to clarify what GrabHitch is.

"The whole point of social carpooling is that drivers can make slight detours to pick up other riders heading in the same direction," she said.

"Riders should expect to share rides with other people."

"GrabHitch drivers are limited to two trips a day but can make multiple pick ups during those trips as long as it doesn't exceed the total cost of the journey."

The reason why GrabHitch is cheaper that GrabCar and GrabShare is because the fare only covers the operational cost.

Related Stories
GrabCar driver picks up 2 passengers but drops off 3 -- after woman gives birth in his car
Woman tells Grab driver "you will soon meet with accident" as he can't pick up kids below 1.35m
Passenger makes Grab driver go to cemetery at night, then goes MIA as a prank
More About:
grab
GrabHitch
angry
scold
passenger