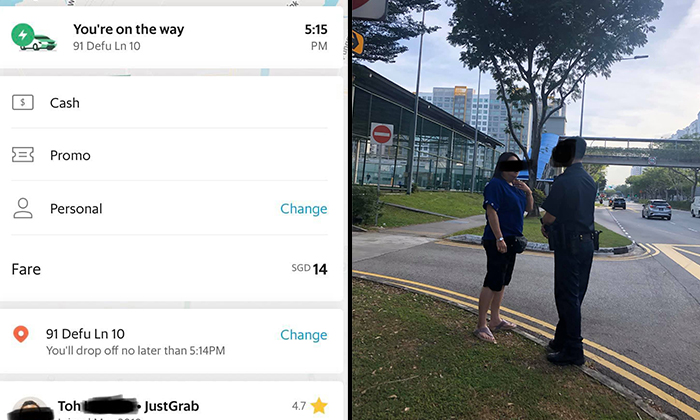 Grab is investigating an incident where a driver called the police because her passengers were "behaving intimately" in her car on Wednesday (Jan 15).

A Stomper shared the incident with Stomp and said: "I booked a Grab from my place in Yishun to go to a business appointment at Defu Lane with my wife at about 4.40pm.

"The woman who picked us up didn't seem very happy and told us to wear our seatbelts, so we did.

"My wife was having a headache and asked if she could hug my arm and lie on my shoulder."

What happened next shocked the Stomper.

"The driver told us to behave ourselves but I didn't even touch my wife.

"Both of my hands were on my phone. I was playing games on my handphone the whole time.

"She warned me and said she wanted to send me to a police station and even said, 'you better sit to the other side'.

"The driver wasn't very happy and told me that she could call the police since I was breaking a law but I know I wasn't, so I told her to go ahead."

The Grab driver called the police and was guided to Sengkang police station via the phone call.

"Somehow, she got lost while we were on the way to the station. She was then supposed to follow a patrol car to another place where we could settle the dispute but she lost her way again," said the Stomper.

"We had to turn back and another two officers got to us. The driver told the police that we were behaving very intimately and affecting her driving.

"The police said we did nothing wrong since we didn't expose any parts of our body and we weren't touching any sensitive areas.

"My wife and I missed our appointment in the end. It wasted our time and we had to call for another Grab to go home.

"I feel very insulted. There's nothing wrong with my wife wanting to hold my arm or lie on my shoulder. We're legally married."

In response to a Stomp query, a Grab spokesperson said: “Grab is aware of this incident and investigations are ongoing.

"We encourage all users on our platform to treat one another with respect and kindness.”