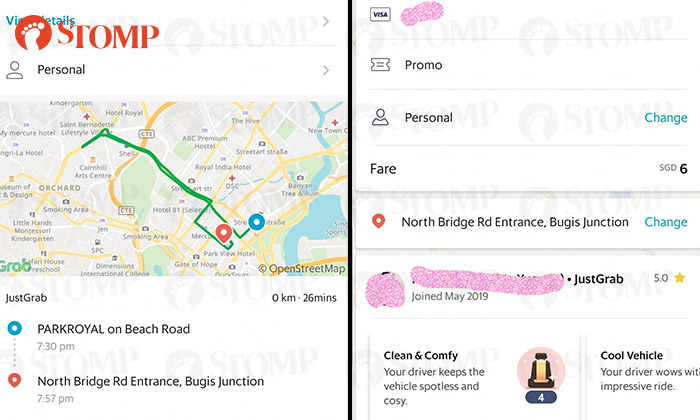 Grab is investigating a case where a passenger almost had to share her ride with another person despite selecting the JustGrab option.

According to Grab's website, JustGrab automatically assigns the nearest vehicle, where this can be a car or a taxi.

A Stomper first published a post of the incident that was reshared on Facebook page Gojek/Grab (Drivers & Riders SG).

The Stomper said: "At about 7pm on Dec 14, I booked a JustGrab from Park Royal to Bugis Junction.

"My two friends and I boarded the car and when we were about to reach Bugis Junction, my friend asked the driver if he could let us alight at Tan Quee Lan Street. This was right opposite Bugis Junction.

"The driver said no and explained that there was another passenger.

"We didn't think of anything and thought maybe he wanted to pick up his next passenger at the location we were going to drop off at.

"We let it go but noticed later that he was going further away from Bugis Junction.

"I was feeling weird and getting more scared, so I questioned the driver if we were going to Bugis Junction.

"The driver said yes and that he was actually going to pick up the next passenger at Raffles City.

"At that point of time, I thought I had selected GrabShare instead, but I found out that I did select JustGrab.

"My friend repeatedly asked the driver if I had selected "GrabShare" instead but he didn't answer her. We were already in the middle of Little India.

"I was confused and thought that JustGrab didn't allow for sharing.

"The driver then answered that the passenger had opted for a GrabShare ride which would be combined with mine since we're both going to the same location.

"I said: 'Huh, we didn't know this.' But he said that it's probably an issue with the system and he didn't know what was wrong.

"The driver then said the GrabShare passenger had cancelled the trip so he'll proceed to Bugis Junction.

"After getting off the car, I called Grab and they kept emphasising that JustGrab isn't a shared ride.

"They said they'll check and get back to me.

"The next day, I thought that I should share this on Facebook. It's not that I want to blame the driver, it's not his fault.

"I think people should be alerted to this issue. I don't want another passenger to be blur and don't know where they're going.

"I also sent a message to Grab via Facebook Messenger. They shared that there's a new feature and I told them that I didn't receive any notification or email about this.

"It's quite misleading. As a passenger, I kept thinking that it isn't a shared ride since I booked JustGrab and not GrabShare.

"I kept asking why passengers weren't informed about this and Grab said this feature wouldn't be launched until Jan 2020.

"They told me that as of now, this feature is still in its pilot phase but I feel that passengers should still be informed or else miscommunication between driver and passenger like this would happen.

"I just feel like I was cheated since the driver knew about the feature and us, as passengers, didn't know about it.

"I didn't even receive any pop-up that provided options for me to choose if it's ok to share my ride. It's like I had no choice.

"I'm quite disappointed that I wasn't informed about this. When I spoke to my friends and colleagues, they too weren't aware about it."

Responding to a Stomp query, a Grab spokesperson said: "We are aware of this incident.

"Based on our data, the user's JustGrab ride was not converted to a GrabShare ride during the journey.

"We are currently investigating the matter."