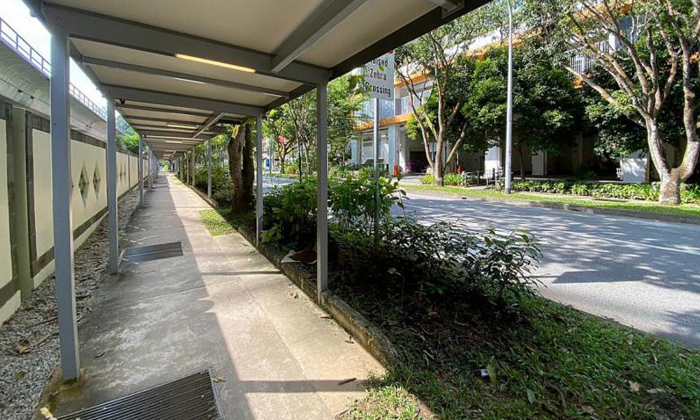 An eight-year-old girl was left with a pair of broken spectacles and a bleeding eye after she was allegedly hit by a food delivery rider on a bicycle on Friday last week.

The accident happened as the pupil was walking home from school with her mother on a footpath in Bukit Batok Street 52.

Following the incident, the police said on Saturday they had arrested an 18-year-old man for his suspected involvement in a case of negligent act causing grievous hurt.

The victim's mother, a 38-year-old accountant who identified herself as Ms Sathiya, told Shin Min that she and her friend had gone to pick up their daughters from school that day.

While on the footpath on the way home, Ms Sathiya noticed a food delivery rider heading towards them.

She instinctively pulled the two girls behind her but in the next second saw that her daughter had been knocked to the ground.

Ms Sathiya, a permanent resident, said: "The cyclist was travelling at a normal speed but somehow hit my daughter's left eye.

"Her glasses were smashed, and the fragments pierced her eyeball and eyelid. There was blood all over her face."

An employee from a nearby nursing home told Shin Min that he heard screams and went to investigate. By the time he arrived, five or six other people were already there to help.

The 53-year-old man, who wanted be known as Mr Zhou, said his colleague used cotton wool to stem the bleeding.

The Singapore Civil Defence Force told The New Paper an ambulance took a person to the National University Hospital.

Ms Sathiya said her daughter underwent surgery on her eye on Friday. A second operation is expected on Jan 25, she added.

While the girl's condition is stable, it is unclear if she has suffered any permanent damage.

Ms Sathiya, who came to Singapore from India with her husband 12 years ago, said her daughter had nightmares and could not sleep after the incident. The couple also have a 16-month-old daughter who is in India.

Police investigations are ongoing. A Grab spokesman told TNP the suspect is a Grab delivery-partner.

"Grab is aware of the incident and has suspended the said delivery-partner. We will assist the police with the investigation," said the spokesman.

Related Stories
52-year-old woman gets 5 stitches on the head after cyclist crashes into her
Cyclist taken to hospital after accident with car in Yishun: 'I saw blood all over the road'
Cyclist dies in hospital after hit-and-run accident with truck at Bedok junction, man arrested
More About:
cyclist
accident
child
pedestrian
grab
injured