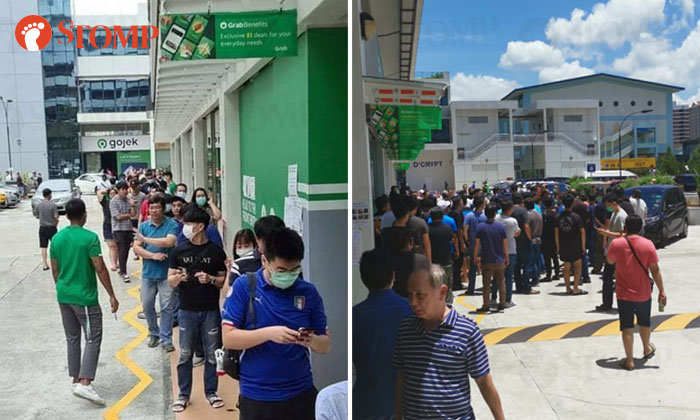 The Grab Driver Centre (GDC) at Sin Ming Lane was forced to close for safety issues after a huge throng of drivers turned up to collect bags for food delivery on Wednesday (Apr 8).

Several Stompers alerted Stomp to photos circulating online of the large group of people crowded around the centre, making it difficult to stick to safe distancing measures.

Several police officers were also spotted at the scene.

In response to a Stomp query, the police said they received a call for assistance on at about 11.10am.

"The involved parties were advised to maintain peace and adhere to safe distancing measures," a police spokesman said.

"They complied and no further police assistance was required."

A Grab spokesman told Stomp several of its driver-partners showed up as part of its extended pilot programme that enables them to sign up to do food and parcel deliveries:

"Many applicants had turned up at the GDC at Sin Ming [on Wednesday] to collect their GrabFood delivery gear, thus forming a queue at our premises.

"Unfortunately, we had to turn a proportion of them away in line with the latest Circuit Breaker measures, as well to ensure the safety of all."

"We would like to take this opportunity to assure our partners that they will be able to apply for an appointment slot to collect their delivery gear soon.

"This will ensure a seamless experience, and we can better support their needs."

Grab also apologised for any inconvenience caused and said it will take all necessary precautions to look after the safety and wellbeing of its partners and wider community.

Those wishing to pick up their delivery gear can now do so at the GDC from 10am to 6pm on weekdays, but only after making an appointment.