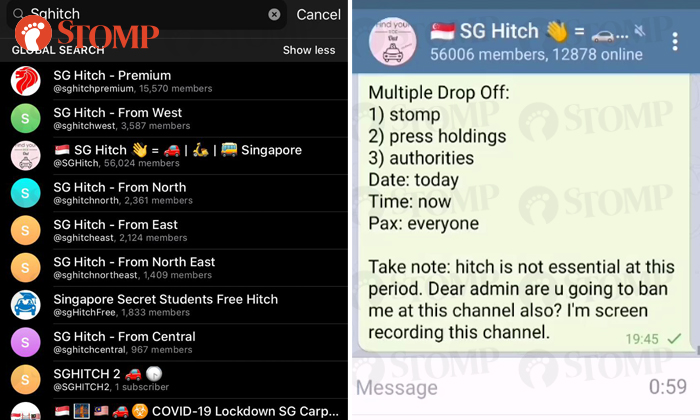 The groups connect drivers and passengers directly, without the need for a middleman.

In a Facebook post on Monday (Apr 6), the National Private Hire Vehicles Association (NPHVA) said that it has "gotten confirmation from the Land Transport Authority (LTA) that carpool service is not considered as an essential service. Hence, all carpool services should be suspended during this period."

Ride-hailing firms such as Grab and Ryde have since suspended similar services.

This has led to many Stompers expressing safety concerns.

Stomper A shared how there are at least 10 such groups on Telegram, from those based on region to those targeting specific demographics. 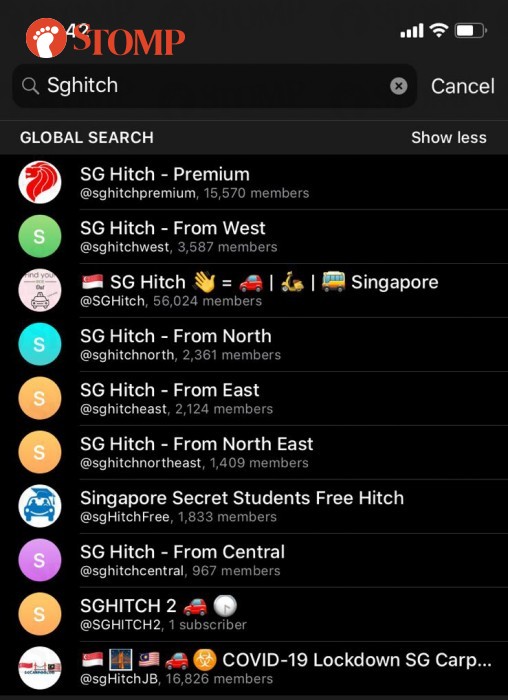 A told Stomp: "It's not a matter of snatching business from drivers on ride-hailing apps.

"The government has already announced that carpooling services are not an essential business but people are still doing it illegally.

"Imagine if a passenger has the virus. They will be spreading it around, to the driver and the driver's family, and vice versa. It will be extremely difficult to trace back.

"This concerns the safety of the whole nation."

Stomper Manirajan also weighed in on the issue and said: "Grab has suspended GrabHitch bookings and Ryde has suspended RydePOOL Per Pax bookings.

"However, many thousands of people are getting still using carpooling services on Telegram.

"This is uncontrolled unlike Grab or Ryde. It also goes against the government's policies and the need to maintain social distance. Contact tracing will also be very difficult."

Meanwhile, Stomper Mat shared how he tried to speak up against one such group on Telegram -- but got kicked out and banned instead.

He recorded the whole process on Tuesday evening and shared the video with Stomp.

The Telegram group has over 56,000 members to date.

He wrote in his post: "I would like to warn the admins to please mute your channel in this dire situation whereby the anonymity of a telegram would be a nuisance to contact tracing if anything were to happen."

"I would like to warn the admins of the group to temporarily shut down your service IMMEDIATELY or we will work our best to shut you down PERMANENTLY," said Ian.

Another Stomper also called for stricter enforcement and said: "These Telegram groups are not regulated and it will be hard tracing the people using the carpool services.

"Everyone must play their part. Together, we can stop spread of Covid-19."

Related Stories
Telegram group shares how to avoid fuel checks at Tuas and Woodlands Checkpoints
Covid-19 circuit breaker measures: What you can and cannot do for the next one month
Coronavirus: 1m safety distance, free masks among precautions by food delivery firms
More About:
illegal
Covid-19