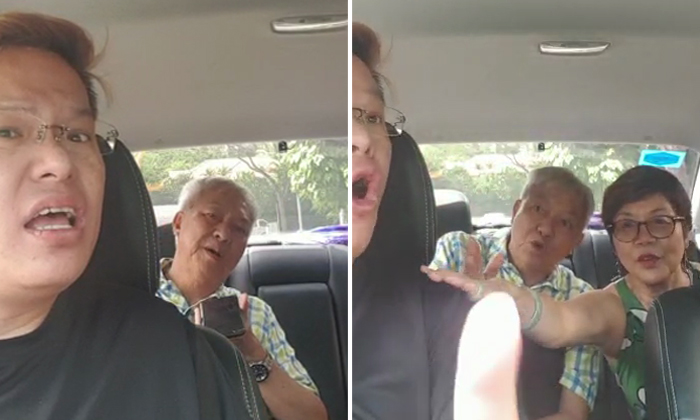 The Gojek driver in the video has come forward to apologise and give his side of the story.

Gojek has taken action to resolve a dispute involving a $7 fare discrepancy that occurred between a driver and his passengers, a spokesman told Stomp in response to queries.

Several Stompers alerted Stomp to a video of the incident, showing a Gojek driver with a male and a female passenger in his car.

The dispute arose from how the elderly male passenger was quoted $14.10 on his app when booking the ride, while the fare was $21.10 on the driver's app.

The video begins with the elderly man trying to explain the situation to someone, presumably Gojek's customer service, on the phone.

However, the driver repeatedly interrupted by saying that the elderly man was wasting his time "for $7" and not to "make your problem [out] to be my problem".

During the dispute, the driver can also be heard telling the passenger:

At one point, the driver appeared so agitated that the female passenger reached over and patted his shoulder.

The driver was also unwilling to make compromises such as cancelling the ride or letting the passengers out as it would affect his "acceptance rate".

According to him, the $7 discrepancy would also be deducted from his account if the elderly man raised the issue with Gojek.

"Let me put it clear to you, anything it becomes driver problem. Always driver’s problem. That is the problem," he added.

The argument finally came to an end when the elderly man said he would pay the driver the $21.10 and "settle" the matter with Gojek.

In response to queries by Stomp, a Gojek spokesman said on Saturday (March 30): "We looked into this case as soon as it was brought to our attention, and have taken swift action to resolve the matter with both parties.

"We want everyone to have a good experience when they use our services, which is why we do not tolerate impolite behaviour by any of our users, be they driver-partners or riders."