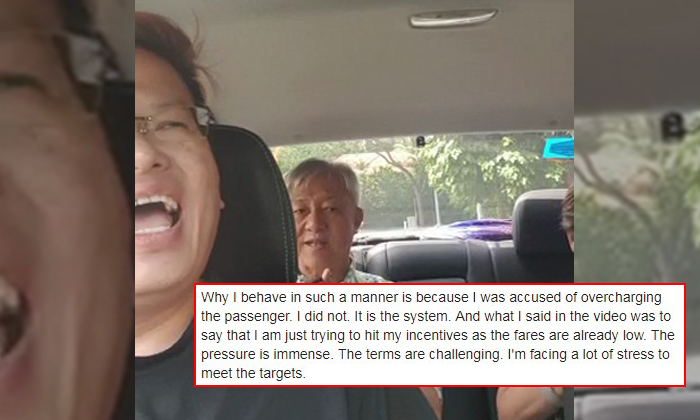 The driver's apology on Facebook appears to no longer be available.

View screenshots of his posting in the gallery.

The Gojek driver seen in a heated dispute with an elderly passenger over a $7 fare discrepancy has come forward to give his side of the story.

A video circulating online shows the dispute, which started due to how the passenger was quoted $14.10 on his app when booking the ride, while the fare was $21.10 on the driver's app.

A Gojek spokesman told Stomp in a statement that it has since taken swift action to resolve the matter with both parties.

In a Facebook post on Saturday (March 30), Aaron Heng identified himself as the Gojek driver in the video and started off by saying that he has "nothing against the elderly, especially the poor and the aged".

According to Heng, he had picked up the couple in the video at a country club.

He added: "Normally, I would confirm with the rider on his destination and the amount to pay and to our surprise, we found out that there was a price discrepancy.

"He suddenly got irritated and asked me to alight him immediately.

"For his own safety, I told him it's dangerous to abruptly stop in the middle of the road like that but he went on insisting to alight him. I obliged."

Heng said that he then managed to find somewhere to let the couple alight and to call Gojek to ask for instructions, adding that he "openly notified" the couple that he was "doing a recording" in case he was accused of overcharging them.

"I cannot afford to lose this job. I've mouths to feed," he wrote in his post.

Heng explained that he had behaved the way he did in the video because he was "accused of overcharging the passenger", which he said he did not.

He also shared: "What I said in the video was to say that I am just trying to hit my incentives as the fares are already low. The pressure is immense. The terms are challenging. I'm facing a lot of stress to meet the targets.

"Lastly, I want to apologise for my behaviour as shown in the video as time is precious to us as a private hirer driver.

"I was unnecessarily rude. I was not respectful. I did not explain myself clearly. I pray for a chance to make good."