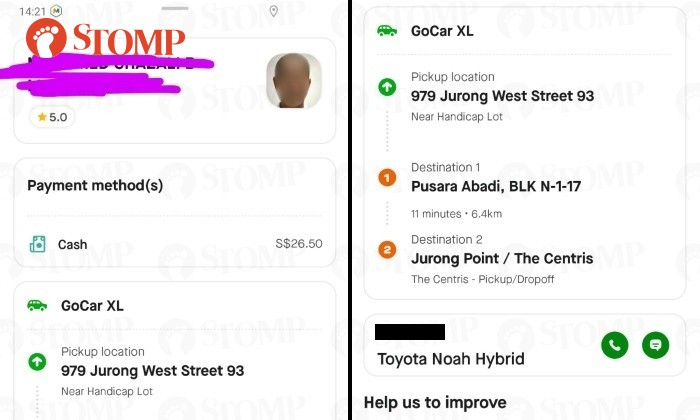 The son-in-law of the Gojek driver who left a Stomper and her family at the Muslim Cemetery has shared his side of the story.

Stomper Rionna had used the Gojek app to book a ride to visit her father's grave with her family of five on Nov 13 and did not indicate in the app that she wanted the driver to wait for them at the grave.

She said: "Before we entered the car, I told the driver that he would have to wait at the grave for five minutes because we needed to give prayers to the deceased. The driver nodded his head."

He said: "The passengers only told him to wait five minutes when they were about to alight the car at the cemetery. If they wanted the driver to wait, they should've indicated it upon booking or messaged before the driver arrived.

"At the cemetery, they made him wait 10 minutes and not five minutes. Common sense, no prayer is done within five minutes. This made him angry and he reminded them to next time indicate in the app that the driver needed to wait so that he can decide whether to take the booking or not."

The son-in-law said this made the Stomper's brother angry and he verbally abused the driver with obscenities.

"Knowing my father-in-law, he is the type who is too lazy to throw his temper, thus he stopped and asked the family to leave his car," he said.

"Upon alighting, my father-in-law told me that the brother took a tree branch and approached him to beat him but was stopped by the sister. The mother was encouraging the brother to go further, but the sister kept stopping him."

"So my father-in-law drove forward and stopped to make a report to Gojek about what happened.

"He did not download the video from his car cam, choosing to just shrug it off as he did not want to escalate things. But when Gojek contacted him, it was too late as the video had already been recorded over."

He added that all this could have been avoided if the waiting time was indicated in the app and the brother was not so "rowdy".

"I am myself a Gojek driver who knows that multiple destinations are only to drop off or pick up and no waiting," he said.

"If the driver wants to wait, then it is his or her choice."

Rionna has contacted Stomp to refute the allegation about the tree branch.

The Stomper said: "The Gojek driver lied. My brother did not pick up a tree branch. Where the heck did my brother even find a tree branch?"