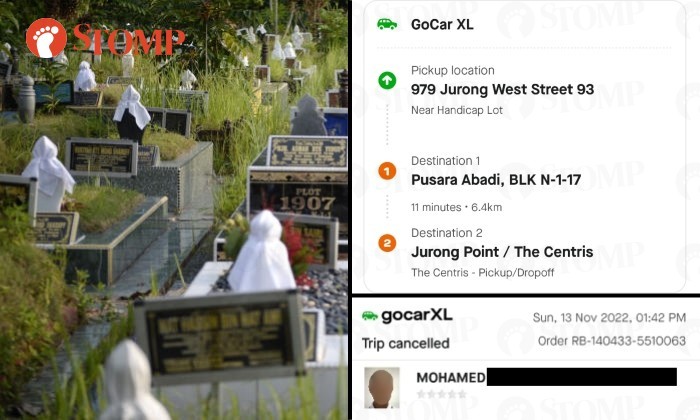 Was there a miscommunication?

A woman and her family were allegedly thrown out of the car by a Gojek driver at the Muslim Cemetery after an argument.

Stomper Rionna had used the Gojek app to book the Toyota Noah Hybrid to visit her father's grave with her family on Nov 13.

She recounted: "Before we entered the car, I told the driver that he would have to wait at the grave for five minutes because we needed to give prayers to the deceased. The driver nodded his head.

"But when we arrived at the location and I told him to wait, the driver said: 'You want me to wait? Wow, power, ah! Power, sia.'

"At that, I knew something was not right with this driver, but we continued. We alighted and went to my dad's grave.

"When we returned to the car, the driver was upset and started to rudely say he wanted to leave us and that it was a good thing that we got him and not another driver because apparently others would have left us.

"I told him that wasn't right. I'd made this request using other ride-hailing apps many times in the past.

"But this only further upset him. So I apologised and said that it was my fault that I didn't write it in the app. But he wouldn't accept my apology and went on to say a rude thing.

"So I said I would pay extra. But strangely, he said he didn't want money and he didn't care about money. So what was it that he was upset about?

"Then he said, 'It's not good, arguing at the cemetery.' Like it was us who were the nasty ones.

"So I asked, if other drivers could do it, why couldn't he? He couldn't answer and chose to endanger our lives.

"All of a sudden, he hit the brake. Imagine driving at 40kmh and then jamming the brake.

"My mom and I had our forehead collide with the seat in front because we weren't wearing our safety belts as none of us expected this to happen.

"The driver opened his car door and told us: 'Get out. Get out.'

"He didn't wait for our response. He didn't even ask for payment.

"Even after we got out of the car, the driver continued to glare at us and stayed for a few minutes as though he was expecting us to re-enter the car of someone who just threw us out at the Muslim Cemetery." 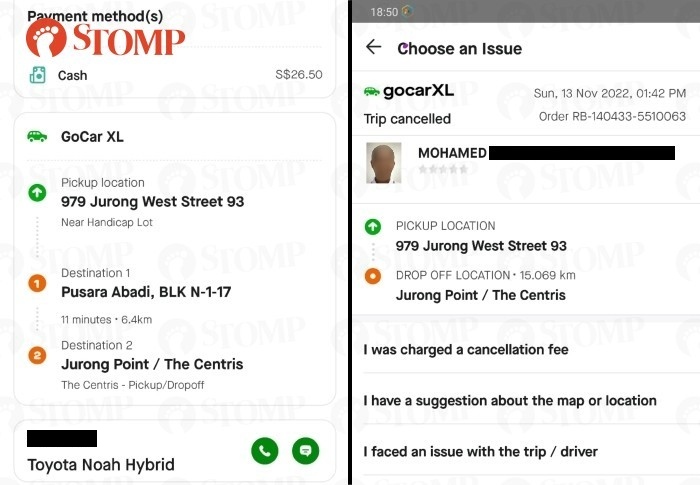 How did they get home after that?

The Stomper said: "There was a kind driver who saw us walking in the rain and offered us a ride. But he was in a hurry, so he could only give us a ride to the nearest bus stop. After that, we just took a bus home."

In response to a Stomp query, a Gojek spokesman said: "We're sorry to hear about what happened between the customer and the driver-partner.

"We do not tolerate this kind of behaviour from our driver-partners and we'll make sure that corrective measures are taken to avoid future occurrences of this issue."