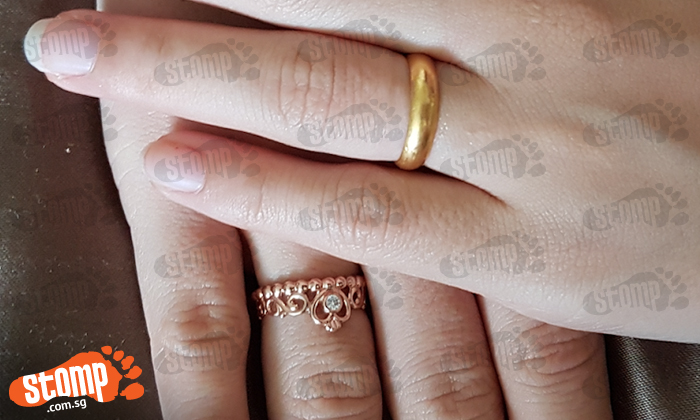 Stomper Jerryboy wishes to thank the kind mall staff who helped to find and return two rings his wife had misplaced in the toilet at Marina Square.

The Stomper and his wife Angela were at Marina Square at 3.50pm yesterday (Dec 13) to do some Christmas shopping.

Angela used the women's toilet on the third storey, opposite Rip Curl, to touch up on her make up.

While doing so, she had removed her engagement ring and accessory ring to wash her hands, but forget about this and left the toilet.

About 15 minutes later, while shopping, she recalled that she had left the two rings in the toilet and rushed back, only to realise that they were already missing.

Dismayed and not knowing what to do next, the couple approached the information counter at the second floor to seek advise.

At the Information Counter, Angela was attended to by a young Indian woman who wore a pair of spectacles.

Jerryboy said that she was very calm and made immediately called her colleagues to seek help for his wife.

"A simple gesture such as offering tissue to my wife who was crying shows that she is a sympathetic person," added the Stomper.

An Indian man, whom the Stomper presumes is the cleaning service supervisor, showed up shortly after and called his colleagues to enquire if anyone had found the rings.

"It was to our great relief that the rings were found by a young Chinese woman from the cleaning service and she had kept it safe," said the Stomper.

"We would really like to convey our thanks to the Indian woman at the Information Counter and the Indian gentleman for their assistance.

"And, the Chinese woman should be complimented for her honesty and her integrity.

"As much as we wanted to get their names to convey this compliment, all three staff members did not wish to furnish their names or take a photo with us, citing that it is part of their job.

"However, I felt that all three of them deserve more than just a word of thanks.

"My wife and I wish to extend our heartfelt thanks and we would really wish to offer our gratitude for the three who assisted us in this most dreadful situation.

"We also hope that these staff members would be nominated for the SPRING Excellent Service Award(EXSA)."