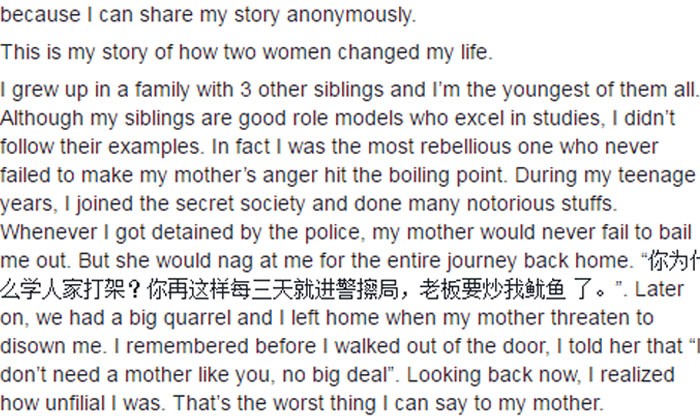 An National University of Singapore student tells his tale of how he got into jail and missed the opportunity to be with his mother on her deathbed while also losing his girlfriend of three years to another man.

Approached by many media groups, this 'Uncle' refuses to be known and has shared his wild journey through NUSWhispers anonymously.

His journey started as a young boy who hated school and joined a secret society when he was a teenager.

Defying his mother, he often was rude to her and she always used to say, ""Why did you learn (from other people) how to fight?

"If you keep getting arrested (by the police) once every three days, I would be fired by the boss."

However, there was another girl who intrigued him.

A petite girl who stood up to him and who ended up getting chased by him in the sweetest of manner.

But, even after three years of being a couple, she was unable to change him.

His loyalty to his 'brothers' never wavered until he got injured in a fight which had caused a victim to die.

He was suspected of murder and got jailed for a really long time.

Long enough, to regret his actions and think about the two girls who never really gave up on him.

Long enough to turn over a new leaf.

View the gallery above to read his full post.