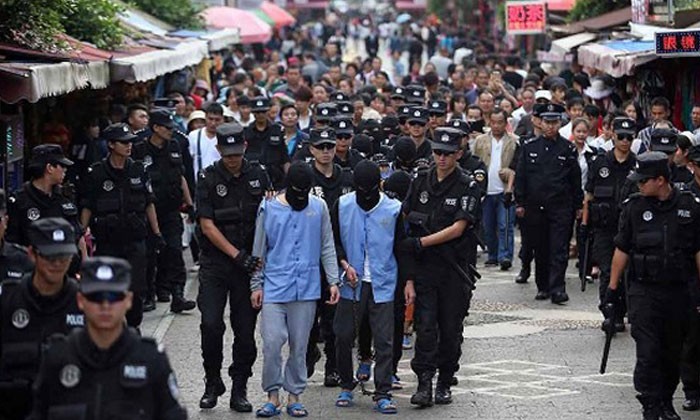 A crime spree went for eight days starting from Oct 5 to Oct 13, in a community in Yunnan, China and the police have arrested 12 members of a gang of robbers that were involved and they had to walk in shame across the streets of Kunming on Tue (Oct 25).

According to Shanghaiist, the leader of the gang was just 16 years old.

On Oct 7, around 2.47am, a man from Hunan province cruised down a street with two women seated behind him.

He was then stopped by five masked men armed with knives who burst out from the side of the road.

Seven more late-night robberies has occurred in the area and special police task force was soon contacted to attend to the case.

The gang's hide-out was discovered using some security cameras and old-fashioned detective work.

It was raided in early morning on Oct 14 and many of the gang members happened to be minors.

To discourage youths from being delinquents, 13 of the gang members were paraded through the streets of Kunming on Tuesday.

China has had a long history of parading those who have done wrong.

Despite the Cultural Revolution effort to outlaw the practice, every once in a while prostitutes or stone lion stealers were made to walk through streets, in shame.

Related Stories
Man robs masseuse, sexually assaults her for an hour and threatens to kick her private parts
Police on islandwide hunt for suspected robber who made away with $20,000 from Standard Chartered bank at Holland Village
'Incriminating' text messages to be used against 3 youths who gang raped 18-year-old in hotel
robbery
Youths behaving badly
China
crime