S'pore doctor gives up 5-figure salary to save street dogs 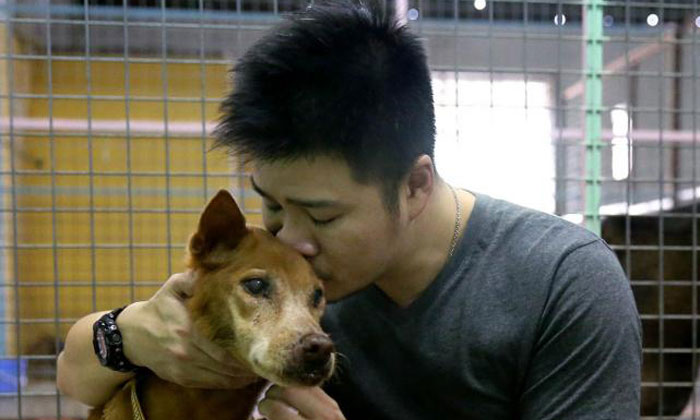 He gave up his five-figure salary as an aesthetic doctor to volunteer full time at an animal welfare group.

Another animal lover sold her property to get some money to look after her charges and create a shelter.

These are the people who work behind the scenes at the seven animal shelters at Pasir Ris Farmway 2.

But an uncertain future looms.

By the end of next year, the shelters will have to leave as the authorities want the land for industrial development, reported The Straits Times.

The dogs are likely to be moved to Sungei Tengah in Kranji, where the Society for the Prevention of Cruelty to Animals (SPCA) is located.

The people behind the shelters told The New Paper that they have always had their leases renewed every year.

Last year, they were told that the leases would no longer be renewed and from June this year, the owners have been getting letters reminding them about it.

In a joint statement to The Straits Times, the Agri-Food and Veterinary Authority (AVA) and Singapore Land Authority (SLA) said that details of the Sungei Tengah tender will be provided when ready.

But the lack of details is making the animal groups unsure how to move forward.

Dr Siew Tuck Wah, 37, president of Save Our Street Dogs (SOSD), quit his cushy job last September to work with the shelter.

"My parents were very worried and thought I was crazy," he said.

After quitting, he quickly realised that money ran out fast, he said.

"I had a bit of savings and I sold some shares in order to pay for all my bills," said the dog lover, who has been volunteering at SOSD since 2012.

"At first, I just had four dogs, and because there was no space to house the dogs, I bought a small kennel for $400 and placed the dogs at my home.

He said he is seeing positive change.

"We see more people coming to our adoption drives...

"We also conduct talks at schools, hospitals and old folks' homes to reach out to the masses."

Today, SOSD has over 100 animals at its facility.

The group has to raise $40,000 to $60,000 each month to keep the shelter going. It expects that relocation will require some funds too.

Dr Siew admitted there is much uncertainty going forward.

He said: "The longer (the authorities) take to give us an answer, the shorter time we have to prepare for the relocation."

He has started his own aesthetic clinic to bring in some money so that he can continue working with SOSD.

A decade ago, she said she sold her house and pumped over a million dollars from the sale into Oasis Second Chance Animal Shelter, which looks after 150 dogs.

Ms Soo, a former high-flying bank employee and vice-chairman for the SPCA, said: "When I saw how the dogs suffered, I thought, somebody must do something for them."

It costs about $10,000 a month to run the shelter, and while there are donations, about $5,000 a month still has to come from her own savings, said the retiree.

When asked about the relocation, she said: "Within a year, how are they supposed to get things done?

"We still have to set up a new facility. How are we going to build a new animal shelter in time?"

The Animal Lovers League's (ALL) shelter, which takes up the space of about half a football field, has close to 400 dogs and over 200 cats.

ALL co-founder Cathy Strong said: "We are already spending $60,000 a month, including medical bills.

"With this impending move, we need to raise the funds needed for the construction of the new shelter.

"Even with the help of our supporters and volunteers, we can hardly make ends meet, let alone put aside money for the move."

She sells flat to house animals

She spent her life savings to care for over 200 cats and 75 dogs at Mdm Wong's Shelter. Now, owner Chaya Koi Kim, 70, is worried about her animals.

Madam Chaya said: "I only knew about the new relocation site from reading the newspapers, and I'm really worried about my animals."

On Oct 15, Mr Louis Ng, an MP for Nee Soon GRC, told volunteers that the Ministry of National Development (MND) will announce plans later for the seven animal welfare groups at Pasir Ris Farmway that have to move out.

However, Mdm Wong's Shelter is a private shelter and not one of the seven official groups.

But she will have to move as she rents a space about the size of a three-room flat from Ericsson Pet Farm, which will be relocated.

The former seamstress sold her five-room flat in 2001 and used most of the money from the sale to pay for the shelter's rent. She and her husband then moved in with her son in his four-room-flat.

Helping her at the shelter are volunteers such as Mr Derrick Tan, 35, who is also president of Voices For Animals, one of the shelters affected by the changes.

He told The New Paper he would bring home stray cats, even as a child.

Madam Chaya, who started taking care of animals when she was in her 20s, said in Mandarin: "I always thought that the cats and dogs on the streets are very pitiful.

"I'm very frugal and have never once taken a plane before.

"All I do every day is complete my chores at home and go down to the shelter to take care of the animals.

When asked if she had sought assistance, she replied that she had yet to.

When contacted, Mr Ng, who founded wildlife rescue group Animal Concerns Research and Education Society (Acres), told TNP that none of the animals will be left stranded.

Mr Ng said: "MND is looking through all the options, as well as the ones submitted by the animal welfare groups.

"We would like to assure the animal shelters - whether you are registered as an animal welfare group or a private shelter - will be treated fairly and provided with options for the animals under their care."