'Angels of Yulin' help to save 1,000 from dog-eating festival 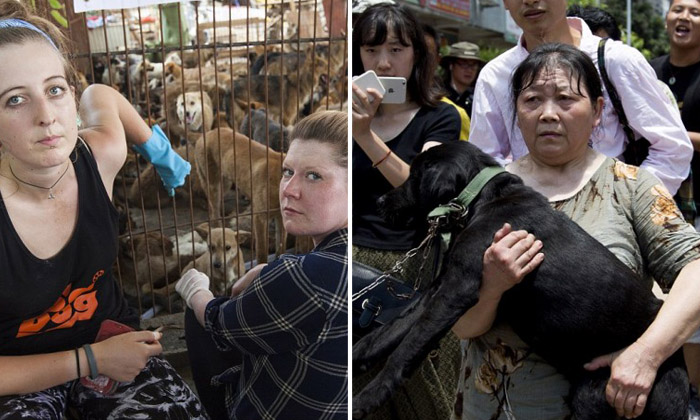 Two British female volunteers nicknamed the "Angels of Yulin" after they helped to save 1,000 dogs from being slaughtered at China’s infamous Yulin Dog Meat Festival.

According to Mail Online via AsianTown, a California-baased, international team of volunteers have paid to shut down the slaughterhouse for annual festival's duration.

Jess Henderson and Helen Reed said they saw pictures of dogs cramped in tiny metal cages and felt that they needed to go and save them.

The charity struck deals and paid thousands of pounds to six slaughterhouses to close during the 10-day event. They lorried the rescued dogs away from the Yulin markets.

"The smell is unbearable," Reed, who works for National Trust, said. "There is a dead dog, two dogs who are dying and dogs fighting. It is heartbreaking."

"It is not just the dogs being eaten, but how they are kept in tiny metal cages and killed beforehand."

He described what happened to the dogs in their final days as "torture".

Many of the surviving dogs wore collars betraying the fact they were stolen pets.

"I went into the cage and some of the dogs ran up to me and let me stroke them," Reed said. "Most of them are stolen pet dogs."

Dog meat with crackling is one of the most popular dishes at the festival.

The crackling is the skin of the dog and is a prized part of the dish and sells for 35 RMB (about S$7) for two people.

After having their throats slit and being put into vats of boiling water and de-hairing machines, the dogs' bodies are blow-torched.

The blow-torching means the dog is half-cooked before it reaches the market stalls where it is chopped up and sold to order by the kilogram, usually for 15 RMB (S$3) per 500 grams.

In restaurants, the dog meat is chopped into chunks and then stir-fried for three to four minutes with garlic, chilli peppers, fresh ginger and star anise.