Biker hit by lorry on AYE: Fellow driver shields rider with car and aids him till help arrives 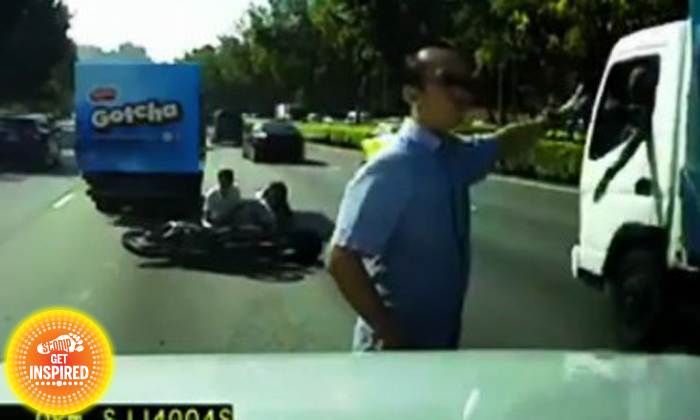 Heavy traffic is no hindrance to civic-mindedness and compassion.

One driver exemplified this after stopping to help an injured motorcyclist, in the middle of a busy expressway.

In a clip posted on Beh Chia Lor - Singapore Road, a lorry driver makes an abrupt lane change on AYE and knocks down a motorcyclist who was speeding between lanes.

The accident occurred at around 9.37am yesterday (Apr 11) on the expressway towards the city, after Portsdown Flyover and before Alexandra Road.

A cabby is seen stopping to check on the rider, and the lorry driver gets out to help him as well.

However, heavy traffic prompts the taxi driver to move along, and the driver behind the injured rider changes lanes and goes on his way as well.

Another driver, identified by the Beh Chia Lor page administrators as Mr Liau, however, stops to shield the rider with his vehicle.

He then gets out of his vehicle to help direct traffic around the rider, who lies injured on the road.

According to the caption on the post, Mr Liau also stayed behind to direct traffic and help the rider until Land Transport Authority (LTA) marshals arrived.