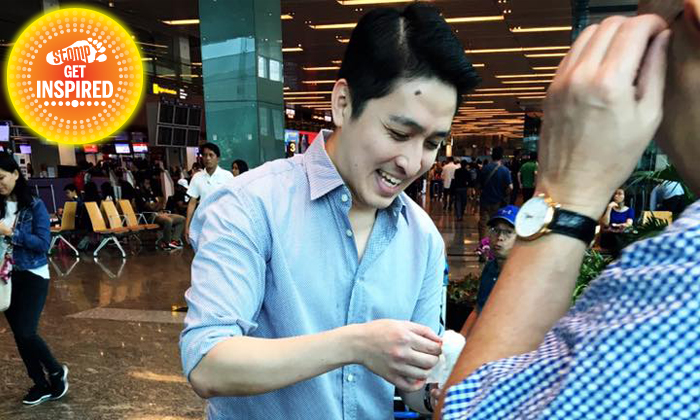 Most of us have heard of the phrase going the extra mile. But there are some people who live by this saying.

Facebook user Darren Hkt made a post on Wednesday (Apr 5), at 12.52pm, on how a man from Jamco Opticals, located in Katong Mall basement 1, breathed new life into the above mentioned phrase.

Darren explained how his dad wanted to change his flight from 12.55pm to 6pm as he urgently needed to a new pair of spectacles.

However, at 11.30am that day, the son Jamco Optical's boss called Darren's dad to tell him not to change his travel plans.

"At 12pm, we saw him from afar as he was running and waving at us," said Darren in his post.

"Drenched in sweat, he adjusted the spectacles for my dad before my dad rushed off for his flight.

"If it wasn't for his effort, my dad would need to go through a long hassle of flight change and it would have affected his business trip.

Darren also appealed for people to help identify the man, and Jamco Optical replied to his post, expressing their thanks for his appreciation.

Jamco Optical also thanked Hoya Lens Singapore and Jaye Lui for rushing the work on the lens for the spectacles.

Stomp wishes to highlight this incident, as even the smallest gesture of kindness from one person can make a big difference to someone else's life.