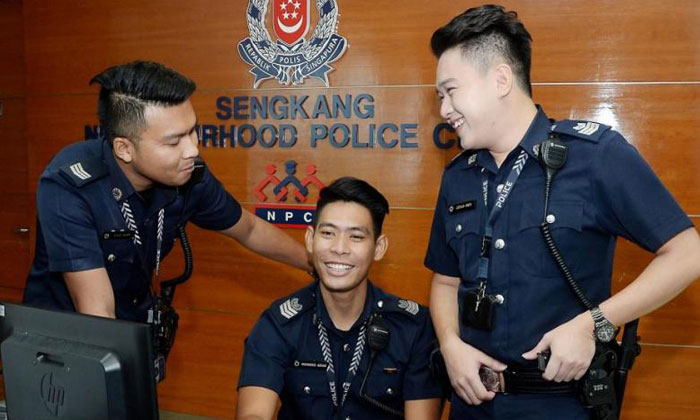 Police Senior Staff Sergeant Mohamad Azhar Abdul Aziz, 30, was handling a complaint from a member of the public on March 18 when an elderly woman dashed into the Sengkang Neighbourhood Police Centre (NPC) carrying a boy, who was limp.

The officer knew something was wrong after taking a look at the boy and that he needed to do something, or the child would die.

Senior Staff Sgt Azhar and Sergeant Mohamad Adam Roslan, 26, were on duty at the NPC at about 2pm that Saturday.

Speaking to The New Paper on Wednesday, Senior Staff Sgt Azhar said: "His head and legs were dangling as his grandmother carried him."

The frantic woman went between Senior Staff Sgt Azhar and Sgt Adam to place the unconscious two-year-old on the counter.

She was speaking in Mandarin in a panicked and shaky voice. Neither officer understood her, but both knew they had to act fast.

As Sgt Adam called for an ambulance, Senior Staff Sgt Azhar checked the boy's vitals. There were no signs of breathing or a pulse, so he applied cardiopulmonary resuscitation (CPR).

Senior Staff Sgt Azhar, who has a daughter the same age as the boy, said: "I was worried because as I was trying to save him, doing the compressions, I was thinking of my daughter and I was quite emotional."

Cradling the boy in one arm, he performed chest compressions with his other hand.

Just as he was about to perform mouth-to-mouth resuscitation, he noticed the boy's teeth were tightly clenched, indicating he was breathing again but experiencing fits

At the time, Staff Sergeant Joshua Kwek, 27, was on the second storey of the NPC having food.

When he heard of the case, he sprinted to the Sengkang Polyclinic next door.

The polyclinic had closed for the day, but he found a doctor who had not yet left for home and told him about the boy.

They took him into the doctor's consultation room.

A Singapore Civil Defence Force spokesman told TNP they sent an ambulance and that the boy was then taken to KK Women's and Children's Hospital.

The grandmother of the boy profusely thanked Senior Staff Sgt Azhar and his colleagues.

Senior Staff Sgt Azhar told TNP: "I feel fortunate that he survived. I did not want a human being to die in my hands."

Assistant Superintendent of Police Muhamad Iskandar Abdul Kadir, the officer-in-charge of the community policing unit for Sengkang NPC, said: "I am proud of them, and they have done the police force proud.

"I am glad they took the initiative to take the boy to the polyclinic instead of waiting for the ambulance."