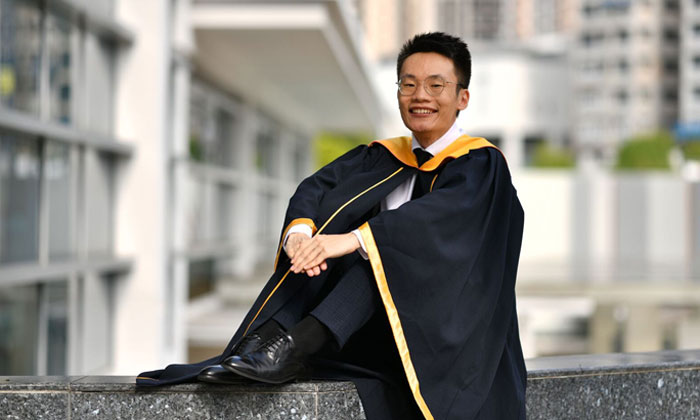 An Alternative Pathway To A Better Future

Playing a key role in Singapore’s cyber defence was far from the mind of Yang Anlin when he arrived from China at the age of 11. Without the ability to speak or understand English, Singapore was an alternate reality to him.

This reality soon hit him hard when he had to start his local education at the Primary Three level – two years older than everyone else. However, Anlin persevered and worked hard all the way, becoming the top GCE O-level student at Tanjong Katong Secondary School.

With his stellar results, Anlin took the advice of his mother and teachers and enrolled in a prestigious junior college. It felt like the ‘safest’ route to university for Anlin as he had no aspirations yet. It turned out to be an enlightening decision.

In junior college, Anlin could not relate to his studies and each school day was stressful and painful, even though he was doing well academically. Just four months before his GCE A-Level exam, Anlin shocked everyone by dropping out.

Anlin didn’t look back and he soon enlisted. Towards the end of National Service, Anlin chanced upon SP’s Diploma in Infocomm Security Management (DISM) course. Intrigued by the modules and the bright job prospects, Anlin realised that this was the light at the end of his tunnel. It also helped that he had a slight interest in Information Technology (IT) since young.

Anlin enrolled in the DISM course, eight years older than his peers. The mature student was more committed and wanted to excel after being given a second chance at education.

In SP, Anlin participated in various IT-related competitions including the SPLASH Awards 2018. These competitions allowed him to hone his skills and realise the areas he was lacking in.

Anlin’s never-ending thirst for knowledge even saw him taking the professional exams to qualify as an Organisational System Security Analyst and a Certified Ethical Hacker.

To stretch himself further, Anlin led the design and development of the S Rajaratnam Endowment Youth Model ASEAN Conference website in 2018 as the Chair of the Website Committee. He also worked on a solution to preserve and acquire evidence on Internet-Of-Things devices to help cybercrime investigators as part of his final-year project.

Coming from a humble background, Anlin has a heart for the community. He performed as a volunteer during Chingay to raise awareness on the challenges facing ex-convicts and also helped out at a hospital and nursing home.

The SP Scholar and Director’s Honour Roll student also took his community service efforts overseas to Thailand, where he led a team of 12 SP students to increase the production of milk for the local farmers.

Back home, the Singtel Cyber Cadet Scholar interned at NCS Pte Ltd, a subsidiary of Singtel, where he wrote scripts and programs to boost the productivity for various cybersecurity projects. Anlin’s diligence saw him receiving the Singtel Best Intern Award over more than 100 university and polytechnic interns.

Upon graduation, the zealous cyber defender will be working as an IT Security Consultant. Anlin hopes to play a big role in Singapore’s cyber defence and become a shining example to his juniors.