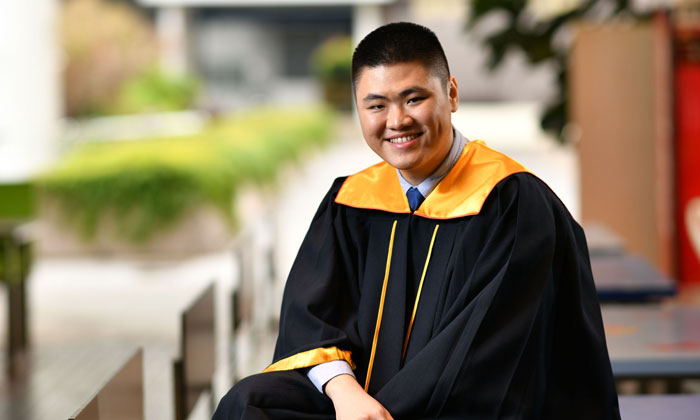 At the age of seven, James Lim En Hui was already exposed to the wonders of a computer. He was curious how a small box could contain so many functions and programs that could transport him to a whole new world. At that time, James felt that the computer was a miracle in a box.

His interest in figuring out how the computer and programs worked even saw him bypassing the controls set by his parents. Building on his passion for programming, James went on to pick up coding skills including C# and Java on his own.

During his teenage years, the Dunearn Secondary School alumnus became proficient in various aspects of programming. Along the way, he also discovered that he was a kinesthetic learner. This led James to apply for the Diploma in Computer Engineering (DCPE) course through the Early Admissions Exercise even before he sat for his GCE O-level exam.

The DCPE course proved to be the right choice for James. During his time in SP, James’ computer engineering skills and knowledge were nurtured further as he was mentored by lecturers who saw his potential. He also received additional training to pick up the skills and knowledge needed to become the polytechnic’s first and youngest student to be a certified Amazon Web Services Solutions Architect Associate.

With his additional skillsets, the Model Student Award winner was given further opportunities to incorporate them in 15 different hackathons and competitions – both local and international – where his desire to use technology to improve lives shone through. As part of the hackathons, James developed unique solutions and technologies including a system that could solve the worldwide extinction of Bluefin tuna as well as apps and various systems for disaster recovery and urban agriculture. These unique innovations allowed James to win 50 per cent of the hackathons he took part in.

Wanting to take his innovations further, James has launched a startup, SudoFoundry LLP, with friends whom he met at the hackathons. The startup aims to further develop and commercialise some of the solutions that James had thought of over the years.

To get a taste of working life, the SP Engineering scholar interned for five months as a software engineer at Grab. There, he improved the stability of various software, drafted plans for increasing the reliability of the Grab app and implemented new features to improve the user experience. As a Centre for Strategic Infocomm Technologies (CSIT) Scholar, James also interned for three months at the centre, where he performed research and development work related to cybersecurity and information technology.

Both internship experiences allowed James to benchmark his skills and knowledge against the industry standards. Realising that he still has a long way to go, James continues to pick up new programming knowledge and is reading up on new developments in the computing world.

The budding technopreneur is already planning to pursue a computing-related degree at a local or foreign university. In the near future, he hope to work on a technology or product that will revolutionise our lives!