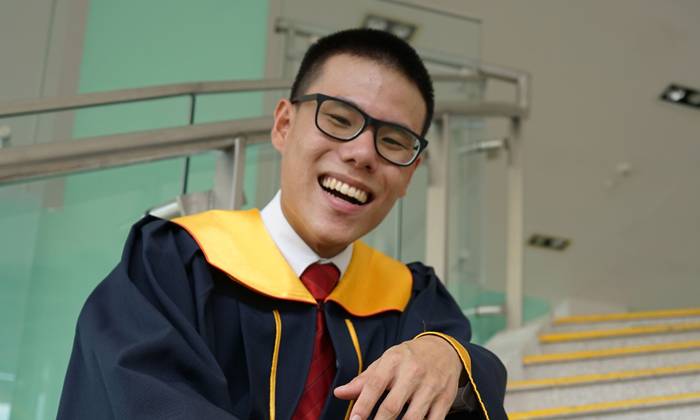 Every Move A Stepping Stone Towards His Passion

As a kid, Raphael Tay Jing Song was always curious about a lot of things. The biggest feeder of Raphael’s curiosity was his seafarer father, who would share about his seafaring adventures with him. As a result, the topic of ships and engineering stood out to him. The Deyi Secondary School alumnus was fascinated about the ability of big vessels to move in water and wanted to understand its inner workings.

When it was time for Raphael to select his next step after the GCE-N Level exam, he knew that he wanted to enrol in the Diploma in Marine Engineering (DMR) course in Singapore Polytechnic (SP) through the Polytechnic Foundation Programme (PFP).

In SP, Raphael was determined to lead a fulfilling and vibrant student life that would pave the way to achieving his dream of becoming a seafarer. As a strong believer of learning through doing, he made sure to contribute actively in group discussions and exchanged ideas with his classmates often.

For his passion and hard work, he maintained a perfect GPA and was even awarded the PFP Study Award and SP Engineering Scholarship!

Raphael enjoyed the Marine Power Plant and Engine Room Simulator lessons the most as they provided a good understanding of the ship’s engine system. This would prove to be useful for his internship stint with NYK Shipmanagement Pte Ltd.

For nine months, Raphael took on the role of an Engine Cadet and sailed on-board three different vessels. From checking the engines to performing oil analysis testing, Raphael was exposed to a wide spectrum of jobs that further deepened his passion for the industry. He also travelled to more than six countries including Japan and the United States.

The vastness of the oceans and the various weather conditions at sea reminded him of the beauty of sailing. Although the living conditions on-board and being away from family were challenging, Raphael persevered and sought support from his colleagues, who not only cheered him on, but also provided him with valuable insights!

Outside of school, Raphael understood the importance of giving back and participated in the Learning Express programme to Danang, Vietnam. Over there, he helped to improve a broom production business in a village. Working with other students, Raphael modified the broom making machine and suggested marketing ideas to the villagers. These ideas gained huge popularity from the locals.

Through the various experiences over the years, Raphael honed his leadership skills and eventually took on an organising committee role during the S Rajaratnam Endowment Youth Model ASEAN Conference (SRE-YMAC) in 2017. He served as a moderator for discussions on using renewable energy to solve societal problems in Southeast Asian countries.

Raphael was also a member of the SP Acers where he helped in the logistics and operations during the SP Open House event.

Right from the start, Raphael already had his mind set on a sailing career. It was no surprise when he signed on the Tripartite Maritime Scholarship Scheme with his internship company and the Maritime Port Authority of Singapore to pursue his passion.

With clear goals and a never-say-die attitude, we can look forward to greater achievements from Raphael!

Related Stories
Singapore Poly student shocked to be 'Stomped' for walking elderly man home in Yishun
How award-winning SP student used adversity to shine in studies and life
SP student determined to show parents that she could succeed -- and she did
More About:
Singapore Polytechnic