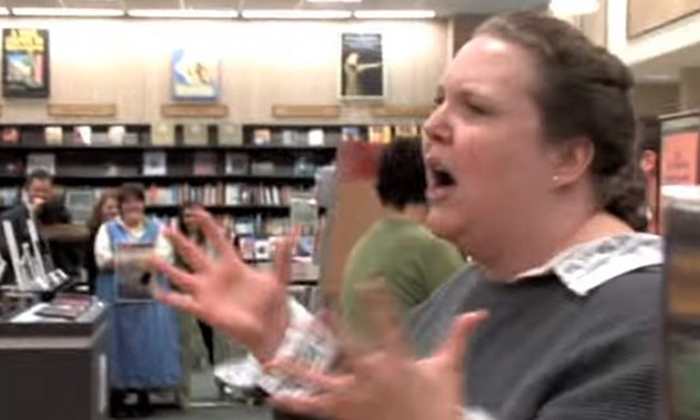 A woman went viral for going absolutely bonkers when Barnes & Noble, a popular US bookstore, did not have her favourite book.

In the clip, she berates the staff for not carrying her favourite author Paul Sheldon's latest book, 'Misery Child'.

In fact, no one seemed to know the author either, a fact she stressed and screamed over.

"How can you be in a bookstore and not know Paul Sheldon?!" she explodes. To which the guy at the counter calmly says he can order it for her.

However, she proceeds to have a total meltdown.

"If this isn't a prank, the clerk deserves a raise," one YouTube user wrote.

The Reading Room revealed the 'secret' behind the woman's outburst -- it was staged.

Generic Theater, which describes itself as “Virginia’s Underground Theater", posted this in 2011. It was a viral marketing tool promoting a stage play in Virginia.

Paul Sheldon is the main character in Stephen King’s 1987 novel 'Misery'. In King’s novel, Sheldon crashes his car and is rescued by a deranged fan, Annie Wilkes, who takes him to her home instead of to the hospital.

Sheldon is held against his will and tortured because of his latest book... Misery’s Child.

It is quite unfortunate that it only went viral now, FOUR YEARS after it was made.