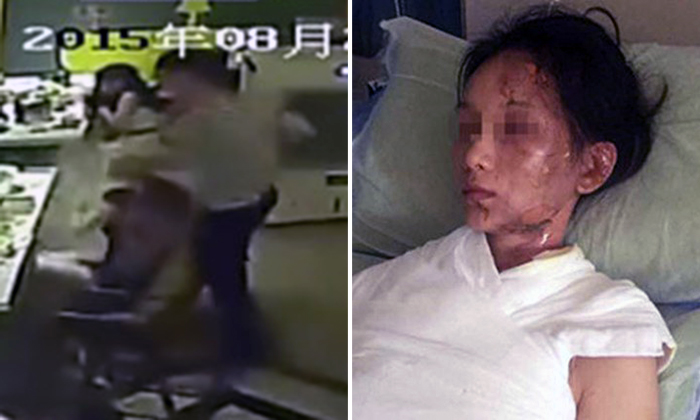 A court in China has ordered a hot pot restaurant to pay compensation to a woman after a waiter poured scalding hot soup on her, resulting in severe burns to 42% of her body.

The woman, surnamed Lin, was dining at the hot pot restaurant with her family, including her mother and her seven-year-old daughter.

She reportedly got into a heated argument with the waiter, surnamed Zhu, about the amount of water in the hot pot.

This made Lin take to social media to blog about the restaurant's poor service.

Zhu angrily demanded that Lin delete her post, but she refused.

In response, the waiter went to the kitchen and returned with a bowl of steaming hot soup.

He proceeded to pour the boiling liquid all over Lin's head before pulling her to the ground and furiously beating her.

Back in January, a district court sentenced Zhu to 22 months in prison for his actions.

The court said it showed leniency because he was only 17 years old at the time of the incident.

Then, on October 24th, a court began hearing Lin's case against the hot pot restaurant itself.

The woman was asking for 577,500 yuan in compensation for the severe injuries she had suffered that night.

The court returned with a decision, awarding Lin just 237,000 yuan in compensation.

The amount was reduced because the restaurant had already paid for Lin's medical treatment, Sina News reports.

Related Stories
Man collecting $100,000 personal debt punches woman in the face and pulls her hair after calling her a prostitute
Man robs masseuse, sexually assaults her for an hour and threatens to kick her private parts
Man punches aunt after she rejects his leave, leaving her with bloody and fractured nose
waiter pours hot soup on woman
dispute
violence