Wait what, LKY has a kitchen in Shanghai!? 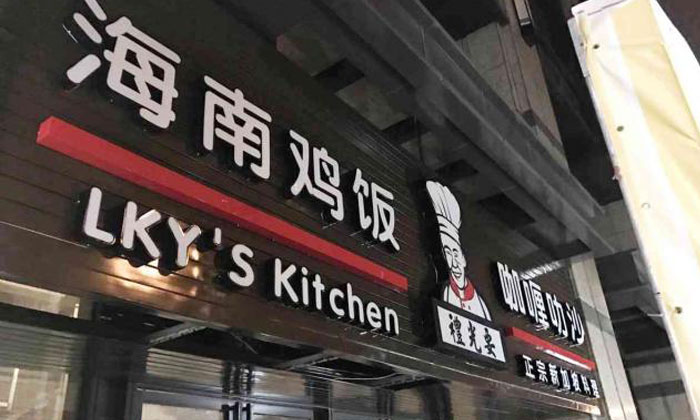 Fed up with less-than-satisfactory Singaporean food in Shanghai, Mr Jason Yap set up his own shop to sell it instead.

And to let Chinese customers know intuitively that it is a Singaporean restaurant, he gave it a name that sounds like Singapore's most well-known icon in China - Li Guang Yao - or the late Mr Lee Kuan Yew. In English, the restaurant is called LKY's Kitchen.

"It's very common in China to have shops and restaurants using the same sounding name as Chinese leaders, such as Wen Jiabao (China's former premier)," said the 32-year-old who is from the IT industry. "I'm just following the Chinese way. I've not intended it to be disrespectful in any way," he told The Straits Times on Monday.

Besides, LKY stands for the initials of Mr Yap and his two long-time friends, Mr Leo Lau, 35, and Mr Kelvin Wong, 33, who are Malaysian. "We've the name, both in English and Chinese, as well as the logo, which is an old man in a chef's uniform, copyrighted in China," said Mr Yap.

He said he is aware his naming of the restaurant has attracted some netizens' attention in Singapore. "I've heard feedback from both sides. There are some who criticise us, but some are also saying that it's good."

The restaurant, which is located in one of the central districts in Shanghai, will open next month once the renovations are completed.

Helmed by Mr Wong, who is the head chef, the restaurant will sell Singaporean specialities such as bak kut teh, Hainanese chicken rice and laksa.

The three business partners have pumped in 1.2 million yuan (S$248,000) into the shop to bring "the best Nanyang food to Shanghai", Mr Yap said.

"I've been here for nine months and have been to many places that sell Singaporean food such as Hainanese chicken rice. They taste quite awful, but business is always brisk. So we thought of seizing this business opportunity ourselves," he added.

He intends to open another four to six shops next year in Shanghai, before venturing out to other Chinese cities.

"We hope to eventually turn it into a franchise."