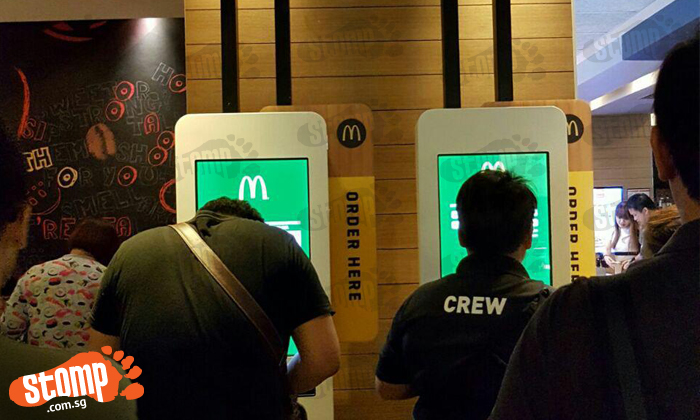 In this day and age of technology, there is a rise in self-service kiosks amongst fast food chains.

However, do these self-ordering kiosks help speed up efficiency and order accuracy, or do they complicate matters and slowdown order process?

Stomper Low was on his taxi break at McDonald’s opposite Jurong Point at 11pm on Oct 5 and for the first time, ordered food from self-ordering kiosks.

“I was puzzled at people queuing at the machine to order food, so I sensed that it must be the latest trend.”

“I felt humiliated as I had difficulty ordering from the machine. There was a queue forming behind me, so feeling embarrassed, I walked away pretending to be receiving a call,” Low added.

After keying in his order at the self-order kiosk, Low was given a two-digit queue number.

Little did he know, payment in cash had to be made only at the counter.

“I only had cash with me and wasn’t aware that I had to head to the counter to pay. Then, I observed that those who paid with their credit card received a four-digit queue number from the kiosk,” Low remarked.

Stomper noted that the food orders were badly handled and some orders got mixed up, leading to many frustrated customers.

"When my order number was called, my food was nowhere to be found. I waited for a few moments before asking about my food. Apparently, my meal had "disappeared". The staff then made another set for me."

However, when his meal had arrived, Stomper realised that the seaweed shaker he ordered was missing.

Compared to the old school way of queuing, ordering and paying at the counter, it was a whole new stressful experience for Stomper Low who ended up spending a full 45 minutes ordering and dining at McDonald’s.

“It’s already challenging enough for a man in his 50s to order his food. Imagine how much more difficult it would be for my mother and other elderlies,” chuckled Low.

Do you think these new self-service kiosks are efficient or troublesome? Let us know in the comments below.