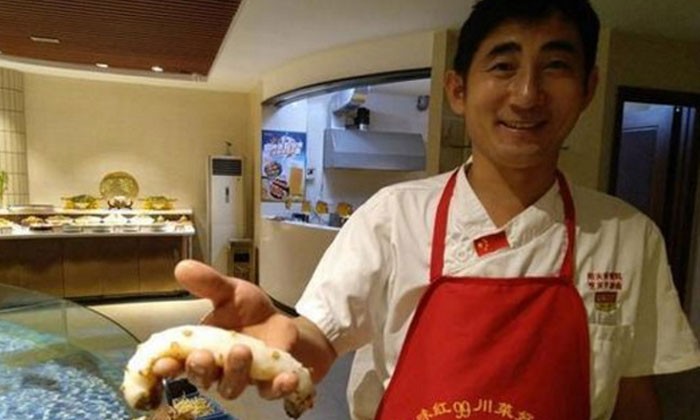 A rare albino sea cucumber has been found by a restaurant owner in China.

According to Shanghaiist, Mr Li, bought the white sea cucumber from a local fisherman, earlier that day,

"I opened this restaurant 15 years ago, I've brought hundreds of thousands of sea cucumbers, this is the first time I've seen a white one," Mr Li, a Qingdao restaurant owner, told a news reporter.

There was a white sea cucumber among the commonly-colored sea cucumbers and it was 18cm long.

He explained that a white sea cucumber can only be found by a fisherman once every three to four years.

This makes the white sea cucumber worth more than their weight in gold.

The creature is uncommon due to it's genetic variation but also because it is not equipped to survive in its habitat since it cannot hide from the predators.

Despite it's lack of camouflaging abilities, some people believe that the creature has miraculous healing powers, and can even cure cancer.

Others believed it brings good luck.

Scientists have tried to clone the creatures by modifying their genetics and in 2015, SCMP reported on a group of Chinese researchers in Qingdao who was successful in obtaining 150 million baby white sea cucumber by modifying the gene responsible for albinism.

As for Mr Li, he wishes to donate it to a marine research center so as to do his part to further understand the strange creature.

Related Stories
Do you know what this is? Strange cloth-like plant attracts large crowd at Woodlands shop
Canberra Link resident finds 'leafy' insect with 'fish-like' eyes at home
Mysterious 'shell' spotted in Buangkok has 'menacing' legs and a life of its own
More About:
strange
creature
weird
rare
China