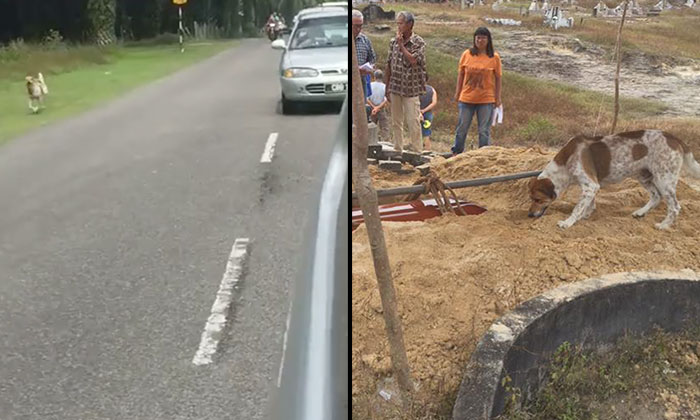 Stomper Ah Boy recently alerted Stomp to a story about a faithful dog that chased after a vehicle convoy holding its deceased owner'ss body during a funeral procession at Kampong Air Jernih, Terengganu, in Malaysia.

Facebook user Leong Khai Wai also shared several pictures and videos of the story in his post. In the photos and videos. the dog was seen chasing the vehicle by running alongside the road.

Even as the vehicles started to pick up speed, the dog refused to give up and kept running desperately.

It followed the vehicles all the way to the cemetery grounds where its owner was buried -- over 3km away.

There, the vehicles finally slowed down.

The dog even laid by the side of a grave dug for its deceased owner, and refused to move as the casket was lowered in.

After someone finally got the dog to move, it shifted aside momentarily and quickly resumed its original position, as it silently looked at the casket.

The heart-wrenching story has left many netizens in tears.

Some criticised the callous nature of the drivers, for not giving the faithful dog a ride.

One netizen commented: "They should at least give the dog a ride. It only wanted to be with its owner, that’s why it didn’t mind walking for a long distance. Poor dog."

Currently, the fate of the dog remains unknown.