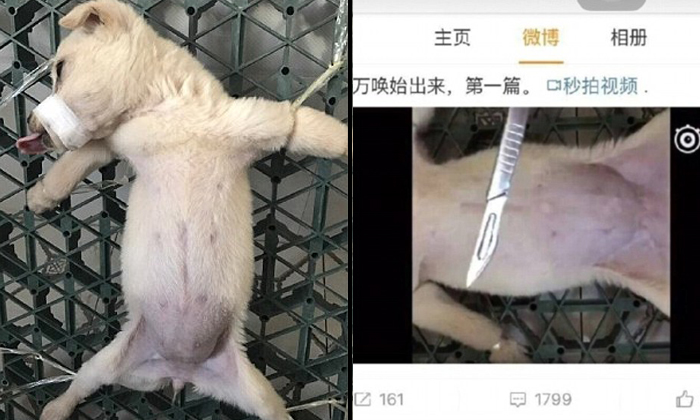 He could not see his dying relative for the last time, because of a traffic jam caused by animal lovers. To seek revenge, a Chinese man livestreamed himself dissecting a live puppy on Tuesday (Jan 17), in an act that has sparked outrage on the Internet.

In a comment to a Chinese netizen, the man said he was half an hour late to reach the hospital where his dying relative was warded and was unable to see the family member, because of a group of animal lovers blocking the highway on Nov 19 last year.

He created an account on Chinese micro-blogging site Weibo under the username ‘I have a puppy here’ and first posted an image of two puppies.

The man claimed that the puppies were brothers and “one will put on a show while the other will be sent to a pet shop.”

On Jan 16, he posted a photo set of one of the puppies with a rope around its neck, with a caption that said “Of course, I won’t hang it. It will have to endure something even more painful than this.”

The following day, he posted a livestream of himself using a scalpel to dissect the puppy, which he had tied to a rubber mat. At one point during the stream, the puppy’s innards were exposed.

When the video was taken down by Weibo’s management, the man reuploaded it a few more times, according to the Daily Mail.

The man said he had treated the dissection in a “seriously scientific manner”, a statement that was condemned by netizens who called him “monstrous” and “inhumane”.

According to Chinese lawyers that People’s Daily Online spoke to, there are no laws in place banning people from livestreaming animal dissections as long as the uploaders claim the video is streamed for research or scientific purpose.

However, Chinese civil law may be violated if the video causes public unrest.

Related Stories
Couple who tried to livestream overnight in Ikea gets busted by police
Malaysian women as young as 14 livestream videos of themselves undressing for money
Singapore teens stream live via new app: Strangers tell them to show off their bodies
animal cruelty
cruel
dog
China